When Mama and Daddy told me and Amelia about this “mountain trek to the villages,” for THREE DAYS we gave them the silent treatment and did not talk to them for the rest of the day. We were very angry at them because who wants to do a 3-day trek in the jungles of Laos where you could get mauled by a Tiger?🤔

(Mom note – news had spread about a monk in India who had been mauled by a tiger while meditating. Horrible, tragic event; really bad timing for us.)

Yeah sure, we had other trekkers with us and guides, but still we were in the jungles of Lao and there is a possibility that we could get mauled by a Tiger or caught in the middle of a bullfight. I’ll talk to you about that later😲☹😤

So after we got ready the night before and had a good nights sleep we went to the office of White Elephant Adventures. We met our guide Song, and he helped us tie on our sleeping bags, jackets and flip-flops and everything we needed. Then we headed off in a songthaew with the 2-day trekkers, Paul (the only other 3-day trekker besides us – thank goodness for Paul!!!) and our two guides.

They gave us breakfast in woven bags – my favorite was the purple coconut sticky rice wrapped in a banana leaf. We talked a lot to the other trekkers and found out two of them had lived in Seattle and worked at Swedish Ballard Hospital where Amelia was born!

After the long drive we all got out and went to the bathroom and put on our sneakers and got our snacks ready. Then we headed out and started trekking.

It was kind of cool at the beginning because we passed a lot of villages and they all said hi to us. It was really cool because after that we kind of entered a really junglee mountainous place and it was like we had just went into two different worlds.

We started climbing a big hill and after the big hill we sat down for lunch. It was really cool because our guide Song went over to a banana tree and cut down some leaves and put them on the ground and they were our benches for lunch. We all sat on the banana leaves and ate our rice and chicken and vegetables. 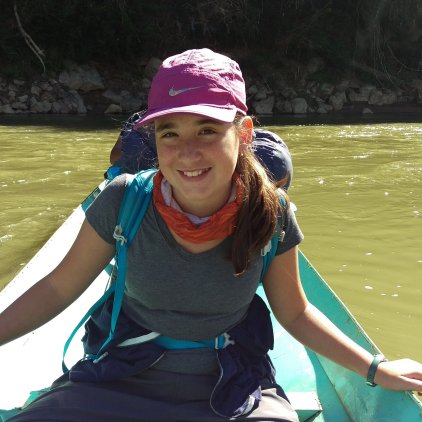 After lunch we started trekking again. This part was kind of hard because we were going up a big rocky, junglee place and we had to use our hands sometimes, yeah, it was that steep. After the rocky area we passed a rice field and we learned a new game. It was called Inky Pinky and it was really fun because it kept us occupied and not thinking about getting mauled by tigers (yes we were still thinking about that). 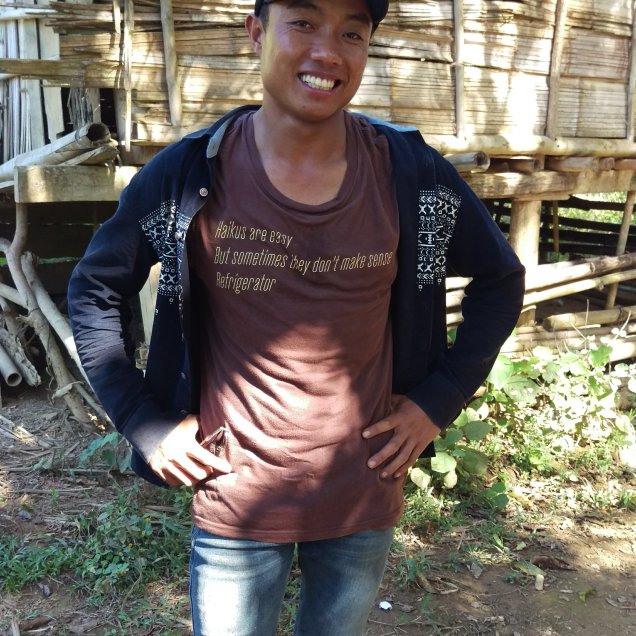 After that and after about a million games of Inky Pinky we split up. The two-day group went to go climb another mountain to see a different village, and our group went to the village that we were sleeping in that night. They were going to come back to the same village so we could all sleep together.

So we got to the village and Paul started playing with a bunch of kids and they really loved it. There were a lot of puppies everywhere. One little girl was just carrying a long curved knife machete thing. Yeah, I said machete and it was crazy because she was running and hacking at doors with it. It was really, really weird and scary so we kind of backed out of there to see if we could help Song with dinner. Dinner was chicken and soup and vegetables and sticky rice. I ate some sticky rice but I didn’t really like it. We had some almonds and dried mango in our snack bag so I ate that. 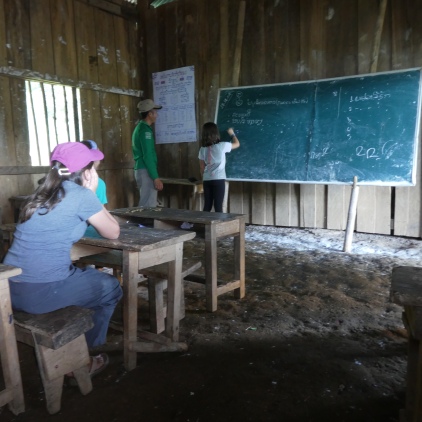 Then we got in our beds – it was a big room with mattresses on the floor and mosquito nets. We heard music outside and went out there and a few people were dancing. We watched and joined in some of the dances but we couldn’t do the bendy finger thing so we just watched. After that we went back to bed and went to a deep deep sleep because we were so tired. 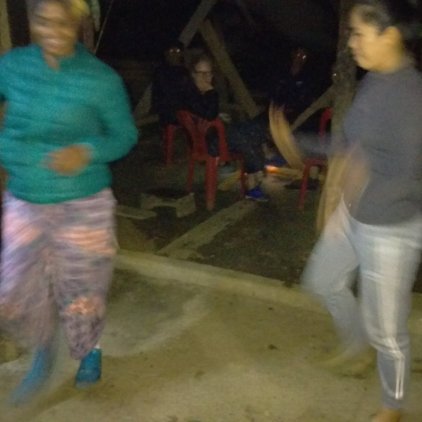 The second day we woke up with a fresh sheet of paper – that means that we kind of woke up with like a good brain in a fresh start to our day, so anyway back to real life. We went outside to get breakfast and it was bread jam eggs and some leftover soup and sticky rice. I didn’t really like it and I thought the rice tasted like mold so I just had a granola bar.

After breakfast we had to say bye to the 2-day trekkers and it was really hard because they were the funniest ones on the trek not including Paul – sorry family. We left the village with Paul and Song and very soon I was so hungry. Luckily my dad saved me a bread and jam and butter sandwich and so it held me off for the next couple hours. 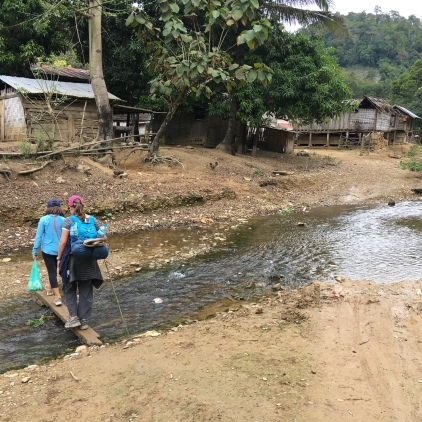 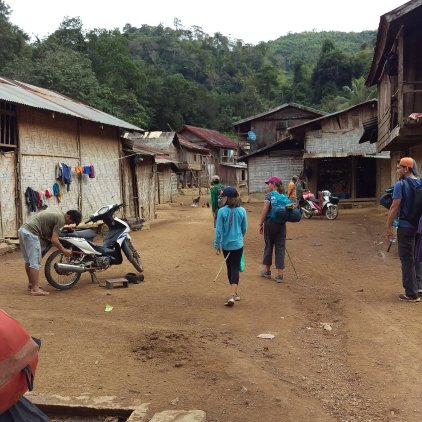 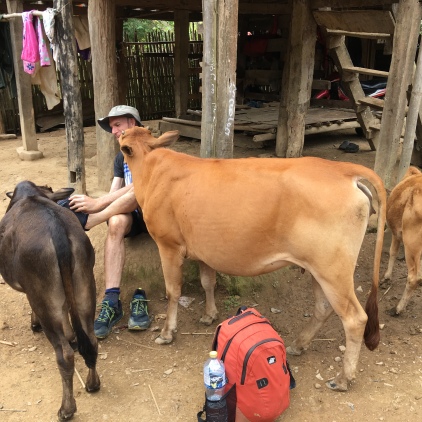 Then we saw the bull fight. So what happened was we are just walking along this little river bank which was really pretty but a bit buggy. We were alone with Song and Paul, and then we saw 2 bulls with their heads together just standing there. One of them pushed the other one into the rock and they started fighting like crazy. We just stepped back and Song was having the best time. He was getting close to them and watching them flight and if they started to push each other and got closer to him he’d jump really far out of the way. He kept walking forward bit by bit, and they kept stopping to put their heads together and stare at each other. That went on for a while until they finally walked up onto a field and we just kept walking.

So after that we had lunch on the river before we climbed a 2-hour ginormous steep hill. Lunch was sticky rice and vegetables. I didn’t eat it because it didn’t taste good to me and so I just had another granola bar, but again that was good for me.

So then we climbed the hill playing Inky Pinky all the way up – it really helped because me and Amelia were not happy. My mom made up this one Inky Pinky and it was really hard and we couldn’t figure it out and we got mad and were throwing sticks all the way up.

After the hill we kind of had little hills and ups and downs but we had to get to the Village quick because we didn’t want to get there after dark. So we hiked really fast and we made it to the Village by sunset. It was really pretty, and Paul got to play with more kids while we sat by a fire. For dinner we had noodle soup which had fish in it. I didn’t like the fish but I ate all the noodles and it filled me up.

After dinner we had a really really really really really cold shower but we were really excited to get into bed because we were staying in the Village Chief’s house upstairs and it was warmer and had more space than the night before because we didn’t have all the 2-day trekkers with us anymore. We had mosquito nets and we were sleeping on the floor again but it was still comfortable because they put out little mats for us. I slept very well that night. 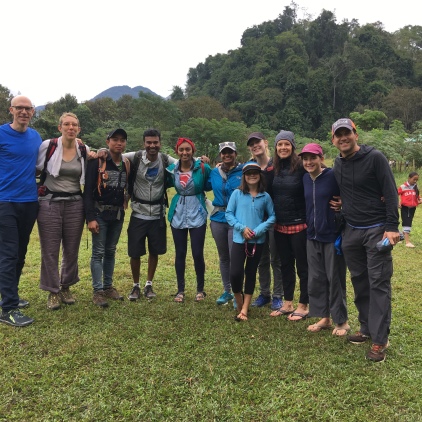 The next morning we woke up and were ready to get our backpacks and start our hike – today was the last day and me and Amelia were so so so excited to end it (but we didn’t know how hard the day would be!). We had our breakfast which was bread and jam and butter and eggs. This time I ate some bread and eggs because me and Paul had an eating contest. I ended up winning 20,000 kip from him. We said bye to the kids and we headed off on our journey.

We knew it would be pretty hard but we didn’t know that we would be doing a ginormous uphill and a ginormous downhill. So we started off and when we were going up we got really tired and had to take a lot of rest breaks.

After 2 hours up when we got to the top of the hill there was a Village with lots of animals – dogs and cows and pigs and chickens. We had to climb a little hill to get to the top of the village. There was so many cows. I didn’t want to walk up there because they were like, hoarding the sidewalk and so I just let Song go first and let him get them into the bushes. It was okay and we got to the top and then we had our big big down.

When we started the down part it wasn’t so bad but after a while we realized it was horrible. Our sneakers were aching and our walking sticks that Song made us from bamboo weren’t working and we were all so tired from the uphill that we were ready to collapse. The downhill was so hard and went on for like hours. We hadn’t had lunch and so we are all pretty tired and hungry so we pushed through the downhill which was so hard. 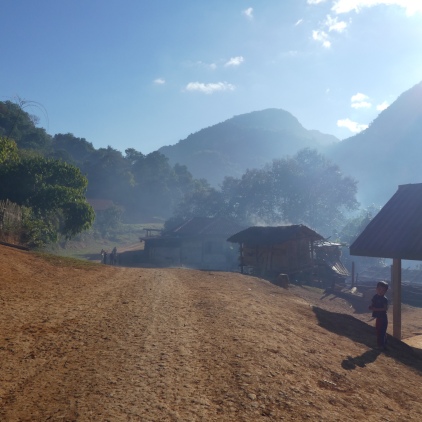 We finally got to the river and saw a broken down bamboo bridge that had flooded to the side of the river that we were on. So we were like, “How are we going to cross?” Then we saw this little boy who was like my age and he was in a big boat and Song told us just to get in. It was really really really scary because even though maybe he knew how to paddle very well, it was like a ten-year-old boy and so we were kind of scared, but we made it to the other side of the river and waited for our other people.

Once we saw the truck that was going to take us back we raced to the top of the hill and got into the truck and literally collapsed. It was the best feeling of the whole trek. In the truck we had lunch – bamboo and noodles, which I didn’t eat. But the truck driver brought watermelon for us and that was great. Then we took a short nap while we were driving home.

It was so nice and we were all so excited to get back. When we got back to the office we gave them back our sleeping bags said Thank You to Song and Goodbye to Paul and went to our next hotel where we spent Christmas. See you on the next blog and thank you very much!! 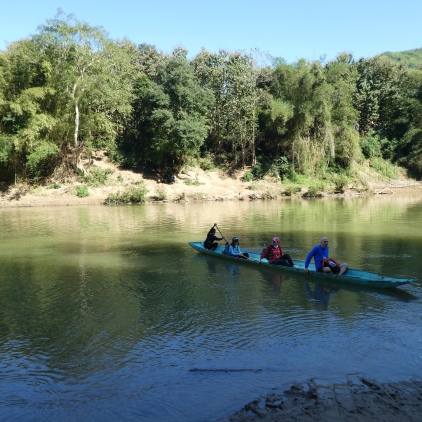