Lingering in Luang Prabang, by Christiana

As I revise this post we are, in real-time, ending a month in Laos and preparing to move on to Vietnam. We have yet to post anything about Laos. We have lots drafted and being worked on, but I’m feeling overwhelmed at being a month behind, trying to remember what we did, how we felt, all of the cultural, political and economic complexities we were learning about through long-term travel, how to communicate those things through all of our voices, and best represent them with the zillions of photos we have on our multiple devices. The blog has been both a joy and a burden – so much to report but so little time – which sounds ridiculous. Isn’t all we have time? In truth we’ve found that between trying to homeschool, sightsee, get exercise and personal time, and research both current and future destinations for history, culture, places to stay and things to do that will suit all four of us, we’re strapped for time. Silly, isn’t it?

We thought maybe if we stopped moving every week and settled a bit, it would be easier to “catch up”. But we never catch up, to any life we’re living. We stayed in Luang Prabang longer than anywhere we’ve been so far and actually felt like it was too long – the girls got tired of the same market, the same hill to climb, the same food (because they frustratingly lack adventurous eating skills for now – understood I guess when you’re cycling through feeling a bit yucky every other day). We were also cautious of overspending on more adventurous, i.e., expensive, tours and experiences after the trek we splurged for. I know, WAAAHHHH. Shut up, privelaged traveler.

On a family travel group site I noticed a comment by a dad who’d done a similar trip four years ago. He said it felt surreal to be celebrating that anniversary, and that if they didn’t have their blog to look back on, they wouldn’t believe that they’d actually done it. That struck me, hard, because I can believe it, now being 6 months in and already forgetting how I felt looking out at the Adriatic Sea from the Croatian coastline, or getting up with the roosters to do farm chores in Southern France.

So I thank anyone who’s read this far into my selfish rant about feeling guilty about being behind. We’re working on it, because this digital expression and preservation of our journey is as much for our family – and likely more so – as it is for anyone reading. We thank you for spending some of your very precious time doing so.

We’d planned to visit three cities in Laos moving overland from North to South along a popular backpacker route – Luang Prabang, Vang Vieng and the capital Vientiane. After a (stealing our friend Lorrie’s descriptive word) dreamy slow boat cruise down the Mekong River , we landed in Luang Prabang for a two week stay.

Laos is far less developed than its neighbor Thailand, and you can feel it on the dusty potholed roads and along the sidewalk-less streets and alleys lined with wood-burning fires supporting soup pots and metal pans tended by crouching women cooking dinner. Luang Prabang (the tourist area anyway) is a strange yet comforting mix of Buddhist temples, French cafes, tour companies, souvenier shops, daily pop-up markets and artist spaces. Backpackers and travelers easily outnumber locals in the languid downtown peninsula.

We were in a spacious rental house for our first week, just across a narrow, bouncy (and seasonal) bamboo bridge to the downtown. Having some space and separate bedrooms was a welcome change to the hostel and guesthouse family rooms we’d shared across Thailand.

We ate great food at Toui’s, owned by a local chef who was also the manager of the house we rented. Right accross from Toui’s were monk dormitories and the stairs leading up to Mt. Phou Si, which we climbed multiple times.

We spent a lot of time at the Novelty Cafe, where Amelia discovered the iced mocha and Annabelle begged us all to play Uno. Just outside the cafe on the street was a friendly woman who made us many chicken-avocado baguette sandwiches, which tasted great but felt strange eating in the middle of Northern Laos.

In our house Annabelle found and read to us an English-printed book that told the story of Big Brother Mouse – a nonprofit devoted to promoting reading for Lao children and helping Lao students practice speaking English. One afternoon we went to volunteer – where we spent two hours in conversation with multiple high school and university-aged students. The girls learned first-hand how hard it can be to make conversation with people you just met! 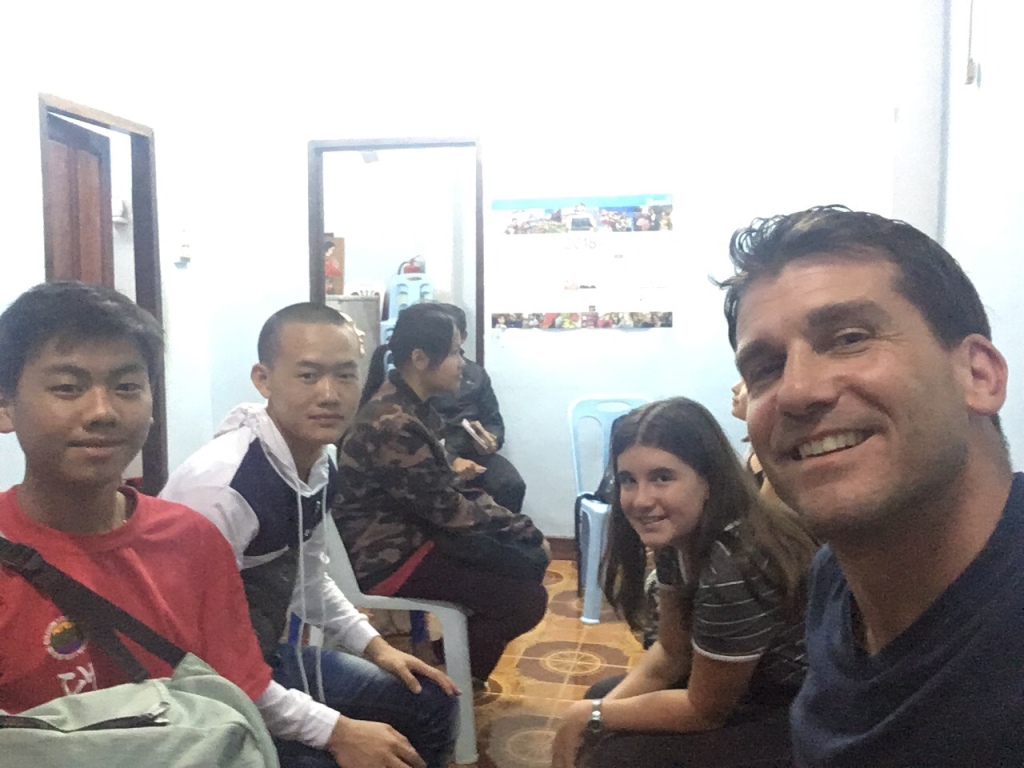 Many Luang Prabang residents are members of ethnic minority groups and grew up in remote tribal villages far from town, farming the family’s rice fields, traveling long distances for secondary school and raising siblings. A few of the students we spoke with at Big Brother Mouse are Hmong, and recommended we witness the last day of Hmong New Year celebrations just outside of town. So the next day we jumped in a taxi that took us about 40 minutes to a large area where hundreds of people were dressed in traditional costumes. There was eating, socializing, some carvival-like games, and for the young adults, an important ball tossing game that looked a bit like an awkward junior high school dance. This tradition is a key part of meeting one’s future mate, as it allows for respectful conversation between prospects during the New Year festivities, which is the one time of year when young people from these remote villages can all come to one place to meet others they wouldn’t normally interact with. 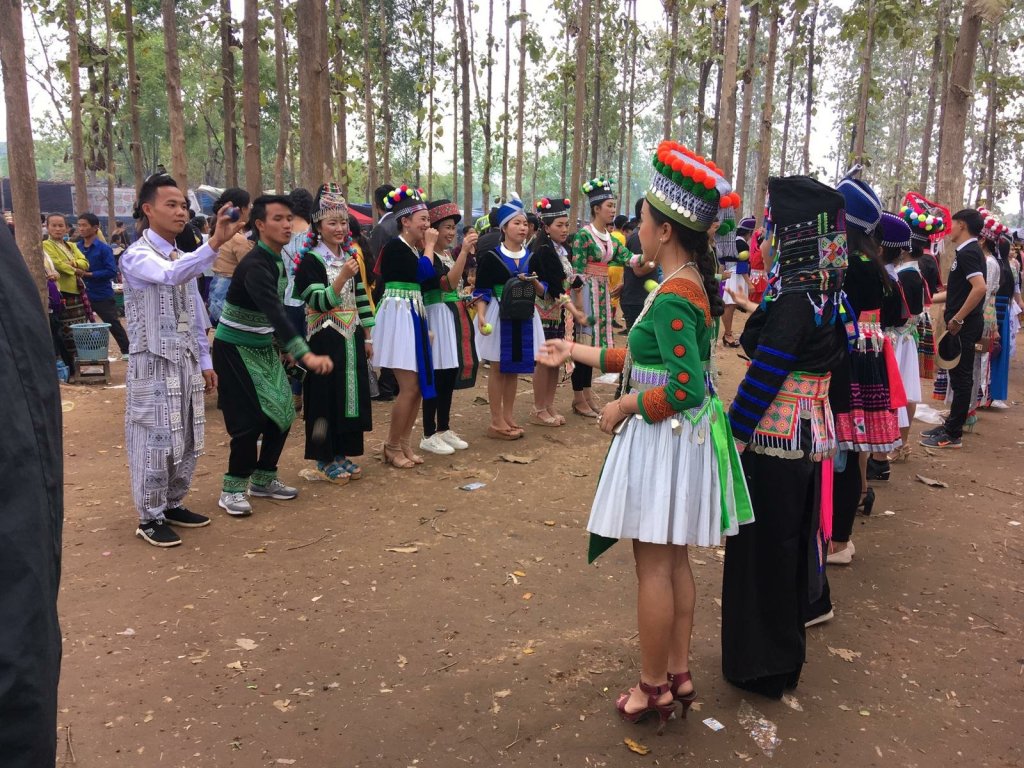 We spent many nights strolling through and eating at the Night Market – the girls became besties with the woman who ran the German Sausage cart. One of the best things of being in small Luang Prabang (or worst, depending on your point of view) was repeatedly running into the same travelers. We kept finding and hanging out with a hysterical, well-traveled Irish couple who taught us some Gaelic and impressed us even more with their ability to speak seven languages.

Textiles are a big part of Lao art, culture and industry. We visited the Ock Pop Tok Living Crafts Center, and the girls took a class with The Weaving Sisters – Amelia writes about that experience here.

A big comfort-zone expander for all of us was the 3-day trek and homestay we booked with local company White Elephant Adventures. In prep, Annabelle was fixated on baking trail snacks. She writes ALL about the trek here.

After the trek we returned to Villa Oasis – a simple hotel with lovely staff, great breakfasts and peaceful surroundings. But spending Christmas away from home really hit the girls hard this week, even with our mini Christmas tree purchased in Chiang Mai and travel socks from Emirates Airlines serving as stockings. We also were excited to find a special Christmas Eve dinner at the backpacker haven Utopia – BBQ chicken, garlic mash, delicious soup and mango sticky rice desert. Dinner was great, there were many backpackers, and while the girls enjoyed their special Western dinner while lounging in huge beanbags, they were the only kids there and unfortunately had no one to commiserate with. 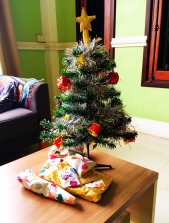 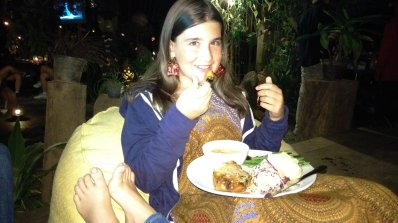 On Christmas Day, we opened small presents and then announced a climb of Mt. Phou Si again…and the girls were pissed. At first we were sympathetic, then we just got angry at their anger, reminding them of how lucky they are to be doing this, blah blah blah. A visit to the German sausage lady later in the evening finally turned them around, but Wayne and I know that letting them struggle with their frustration and homesickness is a good thing. As much as we hate to hear the whining and want to try and fix it, they need to figure it out and get themselves through, as they eventually do.

On one of those whiny mornings Wayne and I escaped for a walk through the amazing Morning Market – so many sights and smells eminating from what seemed like hundreds of individual sellers. I kept thinking of the people in the villages we had visited on our slowboat cruise and trek into the mountains, and wondered if this was an every-day journey into town to sell a few fish, some tomatoes or eggplant, and a few bags of morning glory.

On our last day we hired a tuk tuk to drive us the hour out to Kuang Si waterfalls and were glad we did. It was a perfect end to our stay in Luang Prabang – hiking among the beautiful tiered falls and watching the lazy rescued moon bears improved all of our moods. We were ready to move on, grateful for the extended time we got to spend here. 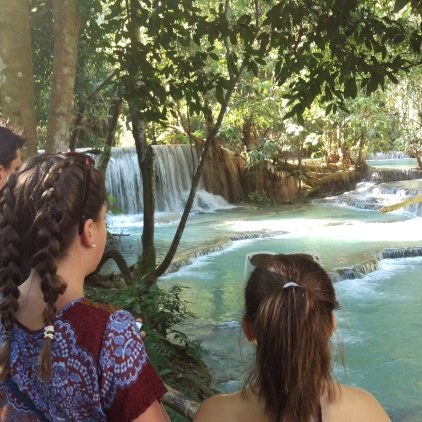