Zoe and Delia and their parents are traveling friends we met in Chiang Mai, Thailand. Our parents figured out how we could all meet up again in Malaysia! We took a plane from Cambodia to Kuala Lumpur, and Zoe and Delia and their parents came on a flight from a part of Malaysia called Penang. We only had one full day with them so we used it wisely – we went to a waterpark and that’s what I’m going to tell you about. 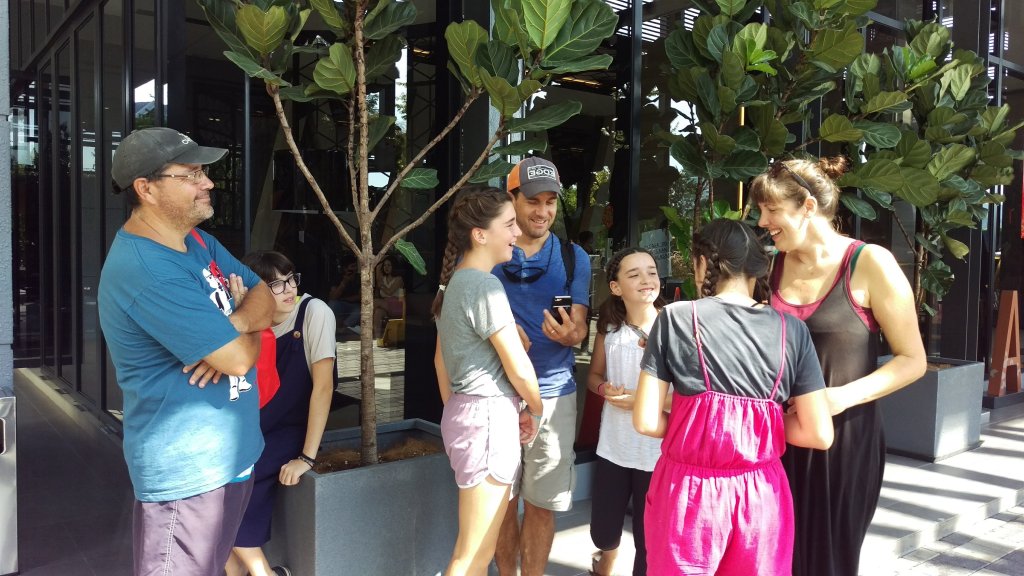 Waiting for taxis outside our apartment building to Sunway Lagoon!

We arrived at the water park and we were all very excited. First we crossed a giant suspension bridge. Delia and Zoe’s mom did NOT like that! 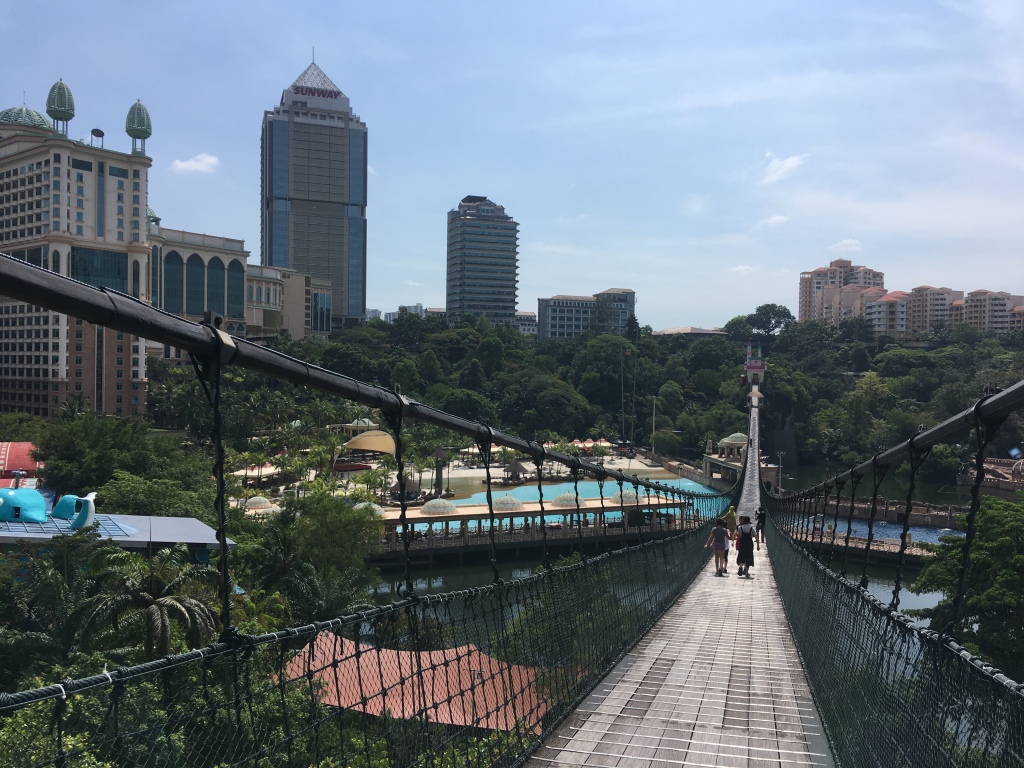 Then, Delia, Zoe, Amelia and I all went to one side of the park while the parents went to the other. We were split up into those groups the whole day. It was really fun to be just with Delia and Zoe. [Mom note: not gonna lie – it was pretty awesome to have a full day of adult fun time too!]

First we went on this really fun big tube ride you got in with 2 people and you went into this really big tunnel and then into a big drop.

After we did some other rides, we went to get some lunch. Our parents had put money onto our bracelets and so we could go get our own lunch. We got pizza and after that got a little ice cream.

Then the parents came back and said they were rocking it because they had done every ride and they were going to go get some Indian food for lunch. We were like, okay you think you can beat us?

So we finished our lunch and raced out to all the water slides and did most of them except for this really scary one where you dropped into a tube that all the parents did, of course .

Then we did a 3D water ride that was really scary – the parents said it wasn’t of course, but it was. We went into a theatre and sat on these chairs and put glasses on. Then a 3D movie showed. It started out calm, but then it was really scary. The chairs wiggled and shook, and water would spray on you. In the movie mermaids were throwing seashells at you, skeletons were having sword fights in a sewer, and a giant snake kept jumping at you. We were screaming the WHOLE TIME!!!!!!

After that ride we did one that we called the toilet bowl. It was amazing but really scary. You would get in this giant tube for 6 people, and you would go in this really big tunnel and then you would pop out into this ginormous toilet bowl and go up and down and up and down until you finally went under a waterfall and came out. We did that one six times because it was so fun. We screamed really loud. When we got other grown ups to get on the tube with us we went so high because we had more weight.

There was a ride that I called the rainbow slide, where you raced each other on mats. We did that one a lot, it was Delia’s favorite.

After the waterpark we went to the amusement park part. We did a really fun roller coaster. I did it maybe 6 times with my mom. Delia and the 2 dads went into a haunted house and came out really scared but laughing. Delia was imitating my Dad’s British accent when he got scared.

After the end of the day we were all so tired, so we went to the mall next to the park for dinner and went back to the hotel. We were going to have a sleepover but we were so tired that we all just fell asleep.

In the morning we had all had an amazing night of sleep and that’s when I’ll take you to Amelia’s blog for what we did the NEXT day. Thank you for reading!!!

[Mom note: Because the adults were having so much fun themselves we didn’t get many photos of this day. But you can check out Delia & Zoe’s mom’s beautiful photos and article on traveling in Malaysia with tweens here.]