Horses, Branches and Hills – by Amelia and Annabelle

Annabelle and I LOVE horses, and we have gotten a few chances to ride them, (like at horse camp with Estelle, and even though Scarlett was too young to do it, I am sure Scarlett would be an amazing cowgirl) but still not many. When the hotel staff told mamma and Annabelle about the horse riding, luckily Annabelle was with mamma, and convinced her to do the whole day tour instead of just 2 hours .Yes I diiid! The hotel called Enzo to meet mamma and Annabelle, and they all talked about it and it was decided that we would meet Enzo (our horse riding guide) at 8am in the hotel lobby the next morning. That evening, we went to go visit the family that none of us had met before, and it was great, but it meant that we didn’t fall asleep in our beds until 11pm. Check out mamma’s post about the visit with the family! It was ok though, because we were so excited we willingly got up early (that’s a first)!

It had been decided that we would follow Enzo in his car to where the horses were. We ended up in a ginormous olive grove and there were 5 horses just randomly tied up on tree branches in the road eating olives. 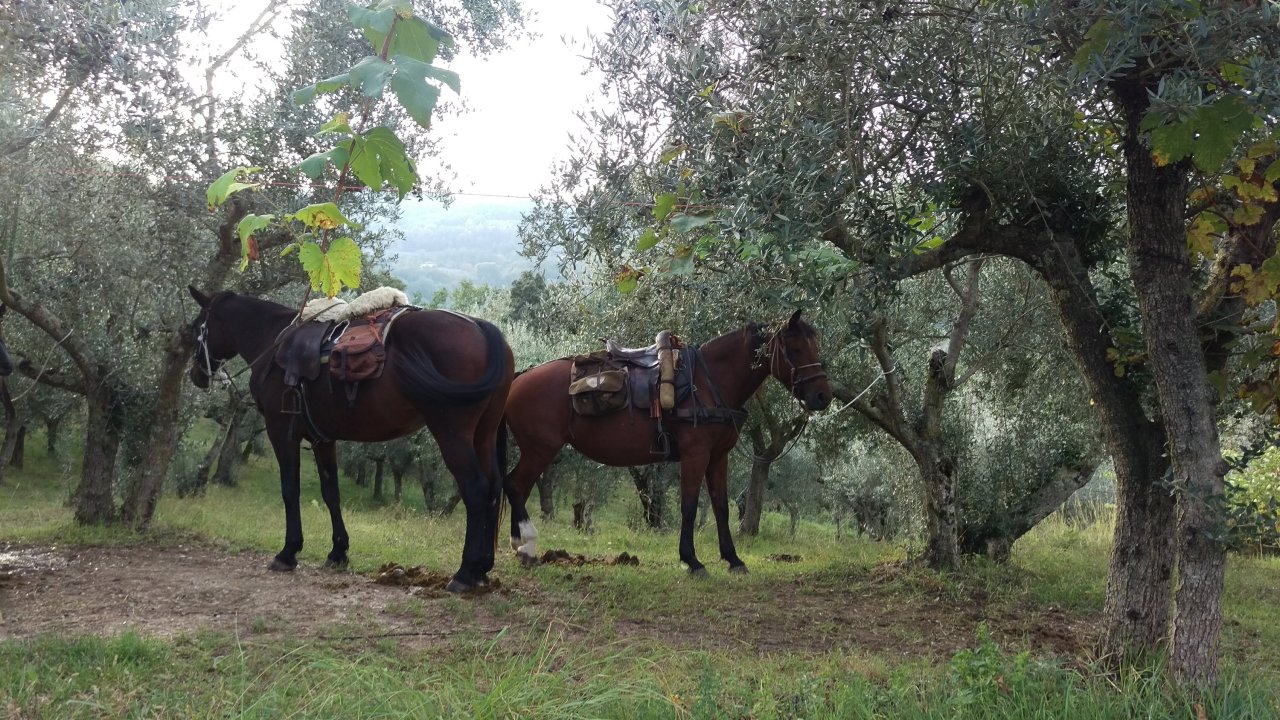 Enzo got out of his car, and told us we were there. We were kind of worried at first! Enzo put me on the biggest horse, and all the color drained from my face, because I was like 20,000 feet up in the air. 😕😯😱🐴(That’s an exaggeration 😉🙃) Well not really, cause I was SUPER high. Luckily Enzo took me down, and said, “You are a little too small”, so he put Amelia on the biggest horse. Then the color drained from HER face. So I was happy, and she wasn’t happy, but I was ok with that. 😁☺

Enzo had an assistant that helped him get people on horses, and assign horses to people. 20 minutes later, I was on the biggest horse, and Dadda was on the smallest horse. 🤔🤷‍♀️

We set off, and Annabelle and I were having the time of our lives. (But still a little bit scared) Then, about 1 hour into our ride, suddenly Annabelle’s horse starts shaking, both the stirrups fall off, and Annabelle almost falls off! Luckily, she held on tight, and didn’t fall off.

We were looking for a place to eat lunch, and Enzo had told us that it was closed, and so we got on our horses and starting riding across a big field. My horse might have had something like a bug on him, so he shook REALLY hard and almost knocked me off, but I held on super tight, and I was trying to tell Enzo to help me, but he couldn’t hear me, and both my stirrups had fallen off, and so my mom and my sister and my dad had to call him to help me, and he finally stopped and put my stirrups back on.

We made our way up a HUGE hill, but when we got to the top, the view was AMAZING! We saw so many towns, and saw how far the horses had come. I didn’t realize that we walked that far! There was a shooting star light that lit up at night, and it was powered by solar panels, that we found on top of the mountain too. We took lots of pictures under the star.

In the first half, Enzo was holding onto my horses rope, so my horse wouldn’t start galloping away, and he pointed to the biggest hill, and I didn’t really understand him, but he said something like “We’re going up there”, and I didn’t believe him, so I just played along with it, and nodded my head, but believe it or not, WE DID! When we looked down, and saw what our horses did, we were all speechless.

When me made our way down we stopped where the horses were tied up, and ate a snack before lunch on an abandoned table. Enzo had very kindly brought us pizza, which Annabelle and I had 1 1\2 pieces of😁

Then, we walked down the hill, and headed toward the restaurant where we were going to have lunch. About halfway there, we had the second scary encounter. And it was me, again!🙄 First of all, there was a fallen log across the pathway, but not all the way down to the ground, it was at like a 45 degree angle. Second of all, most of us were still on the steep muddy hill that led up to the log. Enzo’s horse was leading us, and he had a lot of horse experience so he guided his horse under the highest part of the tree. Annabelle was after Enzo, and she didn’t know how to guide her horse under the tree, but her horse just kept going. All of a sudden I hear Annabelle shouting “Uno momento!, Uno momento!” while her horse almost runs under the tree. She does the only practical thing, she grabs onto the log for safety circumstances, and holds on tight until Enzo turns around to help her. 😬

She will tell you the story from her point of view here:

Another time on the trail, we were going up a REALLY steep hill, and all of the horses kept slipping in the mud, because it had just rained, and we were all kind of scared, but Enzo said it was normal because they don’t have their non-slippy boots on, and so my horse followed Enzo’s horse the whole time, because she was her sister. She followed her up the hill, and there was a big log that was crossing the path, so Enzo rode his horse under the tallest part of the log, and ducked so he wouldn’t have to bonk his head. And so when Enzo’s horse went under, of course MY horse had to follow, but he went under the wrong side of the log, the short side, so I couldn’t duck, because it was too low for me to duck. So I had to hold onto the log for dear life, and my horse kept pushing, so Enzo had to turn around on the tiny pathway, and try to stop my horse, so that everyone else’s horse wouldn’t follow. After that we kept going along the trail, and we were all fine, but that was definitely a shock!

After that, we made our way down to the restaurant, where we had AMAZING gnocchi, and AWESOME French fries. We were all pretty cold, because it had started to rain, so warm gnocchi in our bellies felt really good 😊

After lunch, we slowly made it back to the place where Enzo kept the horses without any more incidents. (Any big incidents anyway, I got dragged through some pretty thick trees!) Thank goodness!

We had so many pictures that we took on this day we decided to make it into a slideshow:

Even though we had a couple of incidents, all in all, it was one of the BEST things we have done on this WHOLE trip so far. We saw amazing views, the horses were GREAT, and Enzo was the PERFECT guide. We thank him very much! 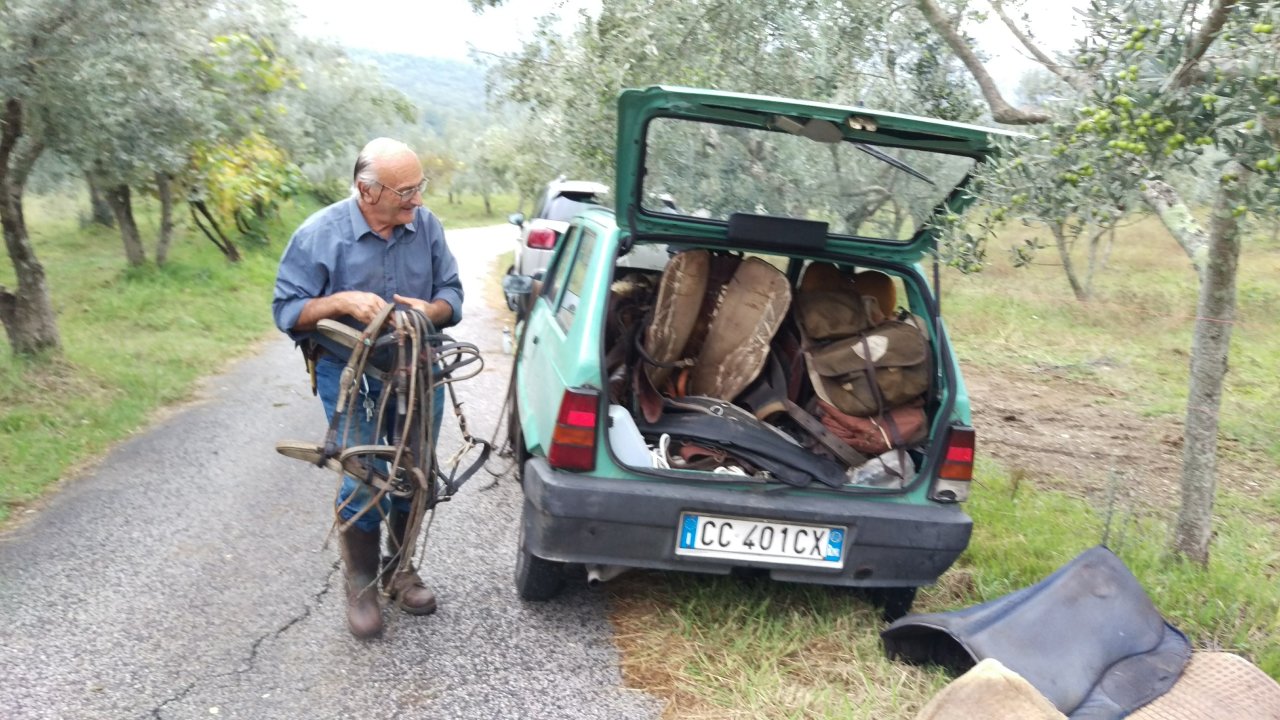 Thanks for reading!
Amelia and Annabelle