Specifics of Bayeux! By Amelia

This blog post will be about some specifics about my time in Bayeux.

One thing that I found amazing in Bayeux, was the Bayeux tapestry. It was about 225 ft of embroidered cloth explaining how the Normans overtook the British. In one scene, it showed Mont Saint-Michel in the backround, (a little more about the castle later) and it was very detailed! We walked through a very long room holding the tapestry with a little machine that you held up to your ear, explaining everything that was in the tapestry. I didn’t exactly get the tapestry and the history, because there was so much happening at once, and the scenes were not always in order of time, so I was very confused when we exited the long room. After seeing the tapestry, we went upstairs to see a movie, (thank goodness it was in English and not French!) which would have been very helpful to have seen before the actual tapestry, because it explained about how the tapestry was made, what differenciates the Norman Soldiers and and the British soldiers, (which would have helped SO MUCH while seeing the tapestry.) After the movie, I was still very confused, the movie kind of helped, but not really, so my mom lead me through a picture of the tapestry, which wasn’t the real thing, but it was a model. She used modern phrases to help me understand, which really helped, like, “And then the British guy was really POed because I mean, this other guy was king, and he wasn’t even supposed to be king, he was just the messenger telling the high up British guy that HE was supposed to be king!” I finally got it at the end, and appreciated the art and creativity. 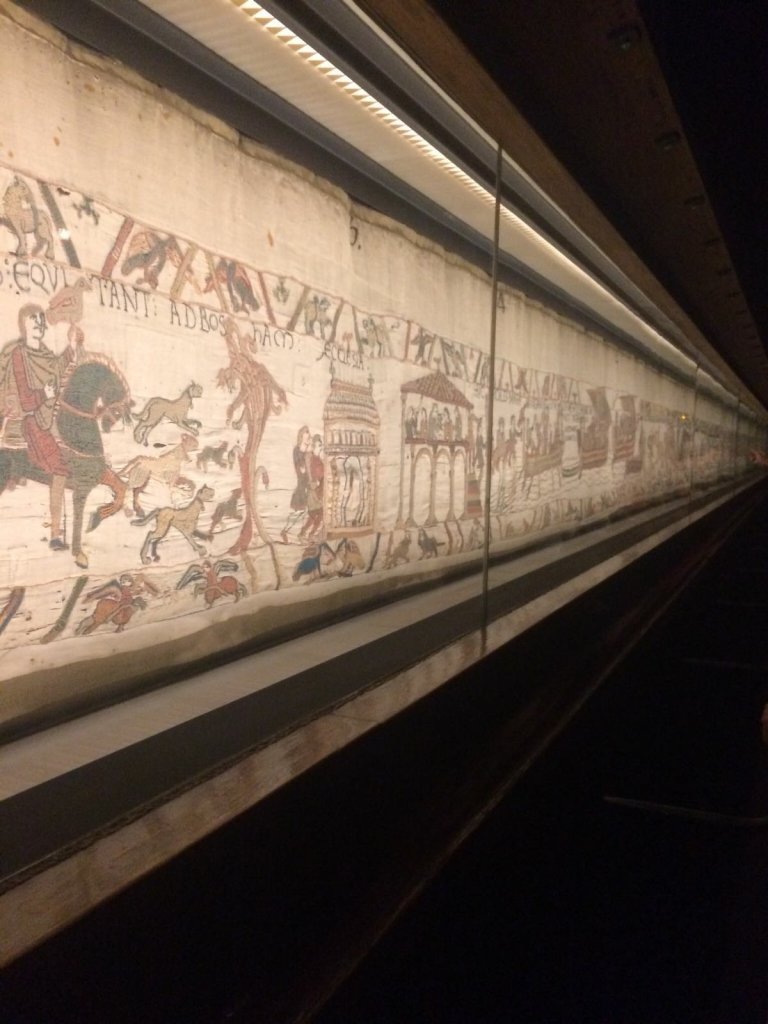 One of the last nights that we were in Bayeux, at 10:30, a ton of people gathered around an almost 300 year old tree called the Liberty Tree, in the middle of the town, where there was a projection show, on that tree, and it was AMAZING! There were different clips, that looked a little bit different wherever you were standing around the tree. There was a clip about Martin Luther King’s “I Have A Dream” speech, which was very powerful. There was also one about San Fransico and wearing flowers in your hair.🤔 Anyway, there were many different clips. Oh, also, there was one about the war, about how everything was fine, then it got horrific, and then it started getting better again. In closing, it was a very good show, and I was glad that we saw it.

In all, Bayuex was an epic place to stay, and I really enjoyed it.

Thanks for reading our blog!