After a great time in Paris with friends, we went off on our own. We trained west to a small town in the Normandy region of France called Bayeux. We had a 6-night stay reserved at an Airbnb in the center of town. Our intention was to slow down a bit from big city activities and crowds, take some time to plan out a few more weeks of stops, and have plenty of time to see the sites, as Bayeux has the incredible combination of 1000-year-old Medieval cathedrals and relics (see Amelia’s post on the Bayeux Tapestry), plus having been a key strategic site and home base from which to visit the D-Day landing beaches that were so critical to Allied Forces operations during WWII (see Wayne’s post).

Our first day in Bayeux was spent 1) doing laundry and 2) figuring out what and how we wanted to explore all that Bayeux and the surrounding areas had to offer. Staying right in the town center made this very easy – the laundromat, Tourist Office, grocery store and lots of shops and restaurants were all steps from our apartment. Figuring out how to do laundry in French wasn’t so easy at first, but we were thankful that we were the only people in the laundromat at the time; with the help of our French phrasebook and Google translate we figured it out and were so very thankful for clean clothes! 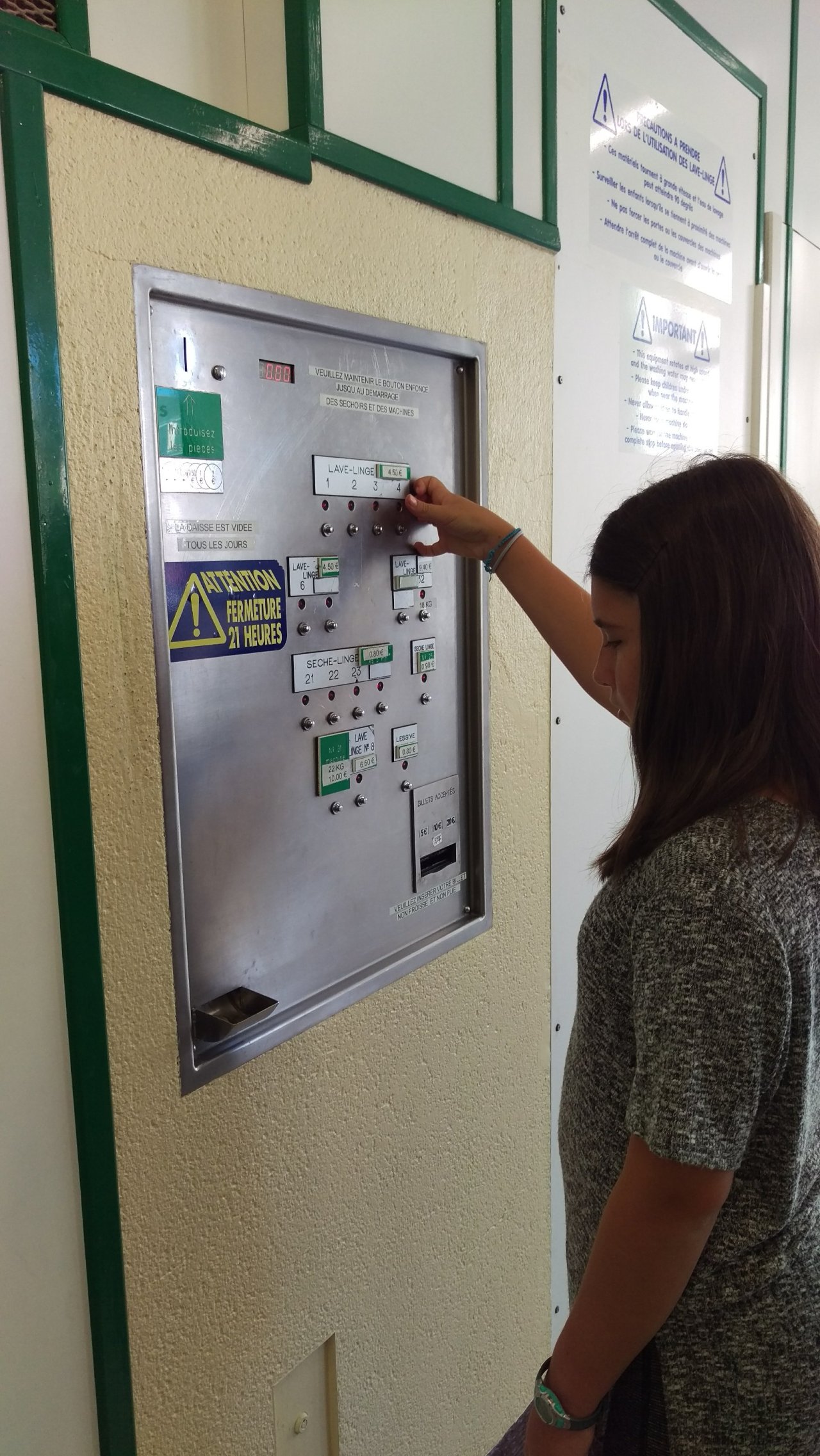 After a visit to the Tourist Office and the grocery store we planned out the week ahead. Wayne’s priority was to spend a lot of time visiting the D-Day landing beaches and WWII sites, mine was to see the Tapestry and spend some time looking ahead and researching our next few stops, and the girls wanted to buy nail polish, do their nails and hit the candy store they’d spied earlier across the street. We all wanted to rent bikes and spend a day riding in the French countryside, and try out local crepes and glace (ice cream).

Balancing everyone’s interests is something we’re learning how to do better as we go, given that we know we’ll all feel some pain if our days’ activities are all parent-driven. Wayne and I had to check ourselves when we openly questioned nail polish and candy; we have to remember how different long-term travel is for all of us. While we adults want to capitalize on the amazing history and stunning architecture around us, not wanting to miss any of it while we’re here, an intention of this trip is to seed a love of travel and the knowledge that any one of us can come back in the future. We will surely make the experience less interesting for the girls if we ignore their goals, however silly they can seem to our old brains. As the novelty of ordering croissants and doing laundry in a foreign language wears off and the tasks of daily living continue to be challenging, the familiarity and simple excitement of a new nail polish could help the girls adjust to this new normal. 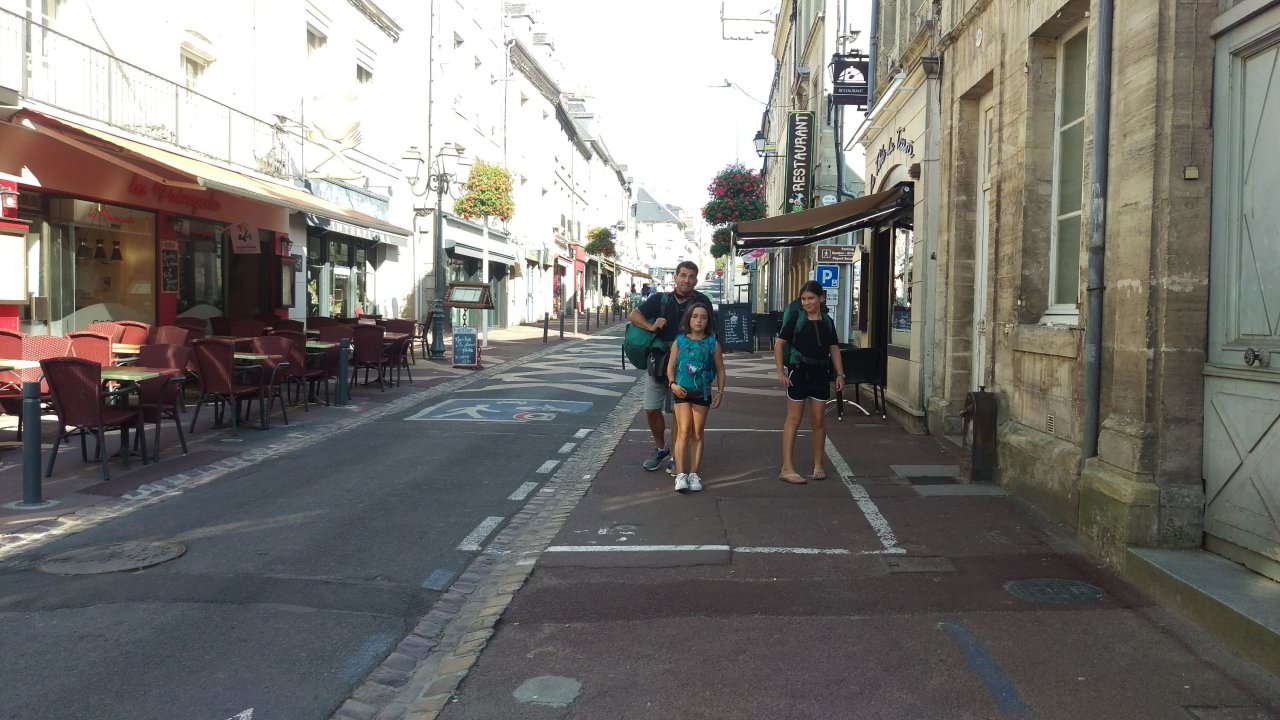 Our second day in Bayeux was my favorite. First though, a mistep in trying to ask the nearest bike shop in town about renting “velos” for the next day: the shop owner – who also sold glace and fresh produce – didn’t have much patience for our limited French and numerous questions. When we asked to see the bikes available to rent, she said, “All out.” Yet, behind the shop there were multiple bikes in racks. So we took the hint, searched TripAdvisor and made a phone call that pointed us to Loc Velo, a great bike shop about a mile out of town. By 10am the next day with Francois’s fantastic assistance we were outfitted with one tandem and two single velos for our adventure. 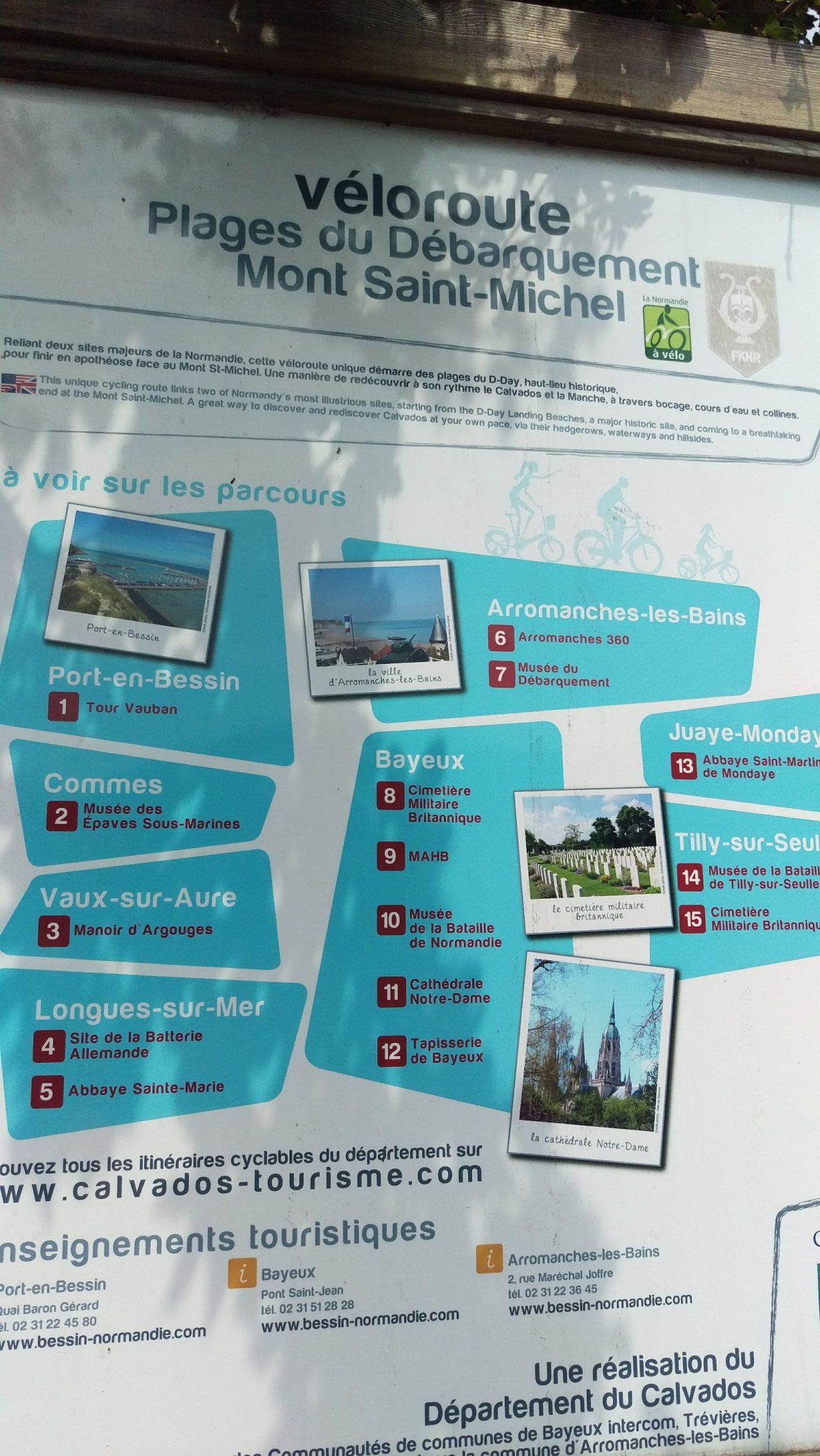 With a paper map and cell phone navigation (thankful every single day for the ease of travel afforded by modern technology), we found our way along bike paths and winding narrow roads through fields and farms. Biking as a family is something we’d done a lot of at home, so it was familiar and wonderful to be back in (small and slightly painful) saddles together exploring Normandy.

We eventually made our way to Arromanches-les-Bains; D-Day codenamed Gold beach – the landing site for British forces. We spent a few hours having lunch, viewing tanks and old pontoon structures on land and remaining in the sea, walking (and coordianting leaps) on the beach, shopping (me & the girls) and visiting the Musee du Debarquement (Wayne). 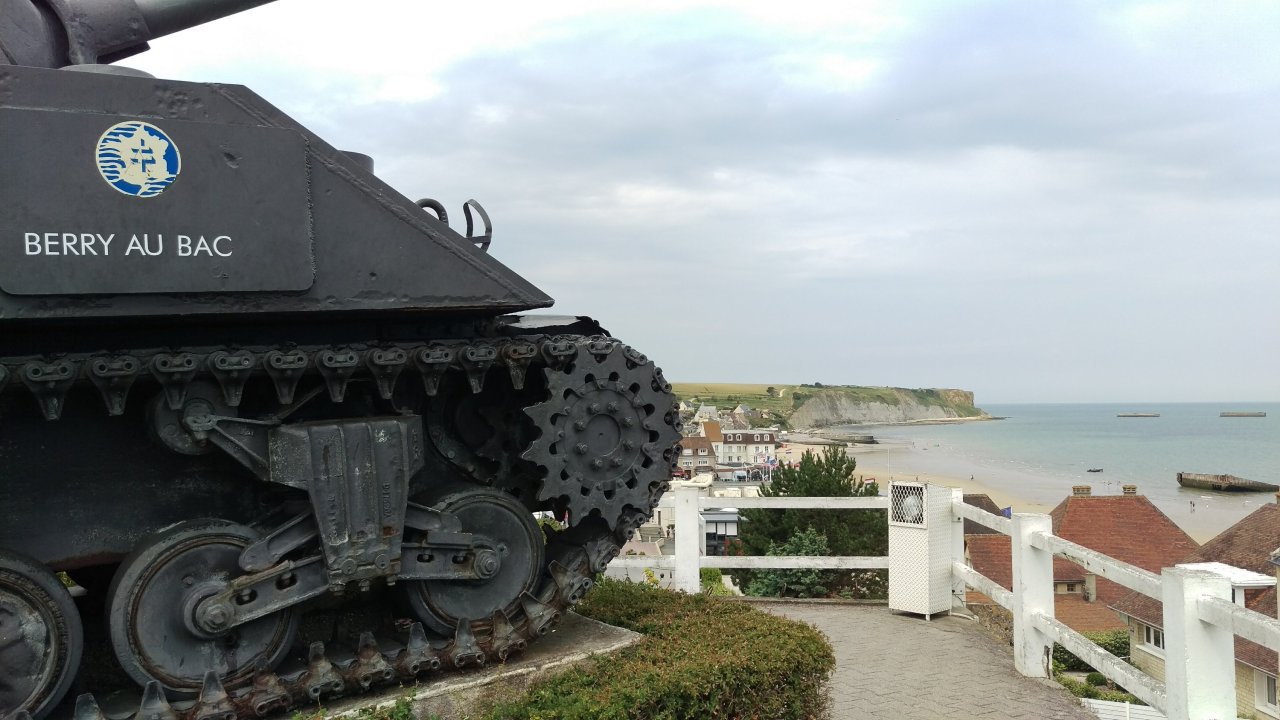 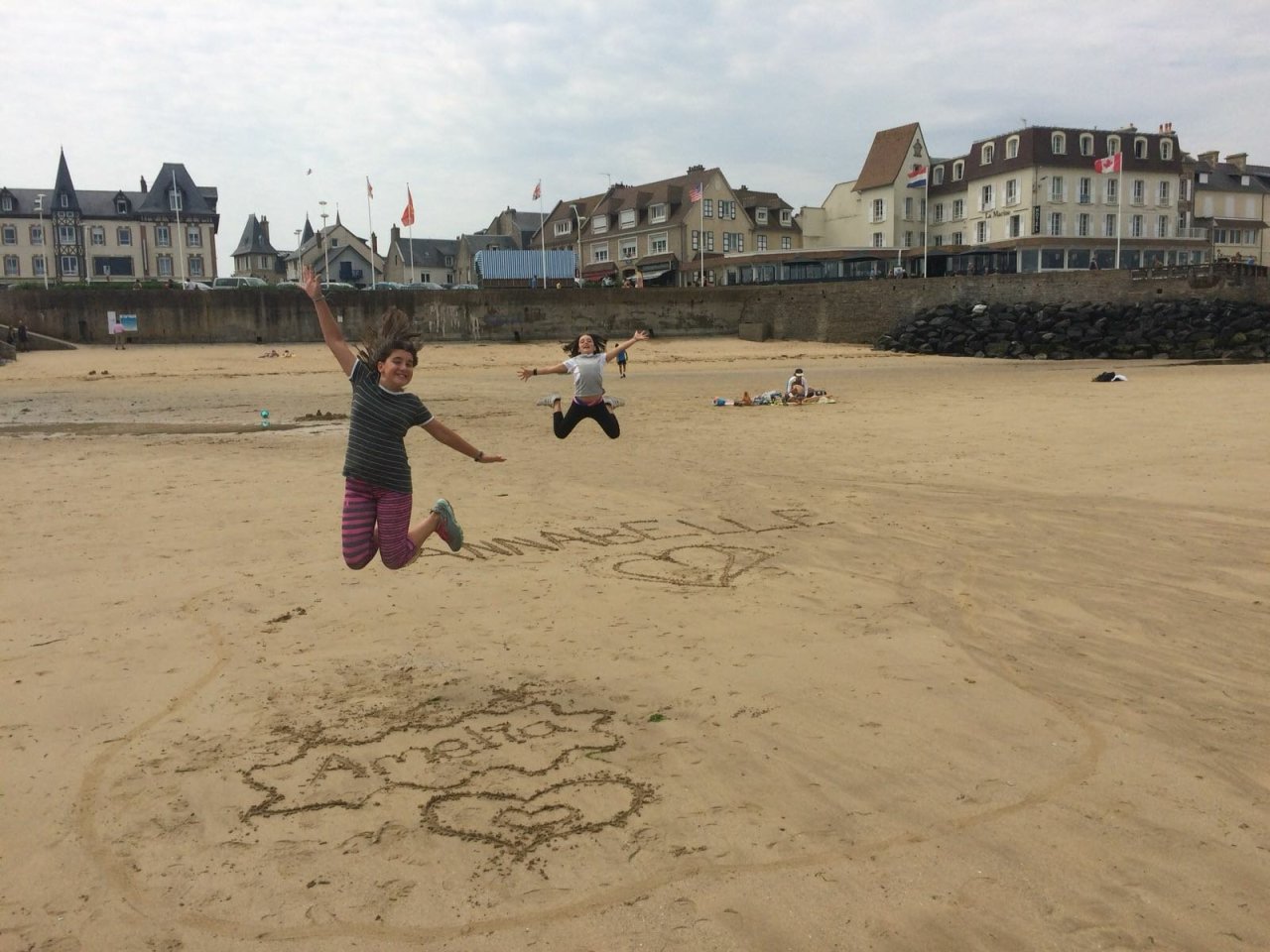 After Arromanches we biked further west along coastal cycling roads to Longues-sur-Mer, a cliff site that had four German bunkers – most fairly intact and one that had been partially destroyed – that we explored.

The girls had questions that would stump any parent trying to teach their school-aged children about war. Amelia asked, “What happens when you surrender?” and Annabelle probed further with, “So what do you win when you “win” a war?” We attempted to explain but as with most hard questions there’s often no clear answer and a lot of “It depends.” We were pretty happy that they were listening and observing all that was around them, for a little while anyway. A fair question from Annabelle that came later in the week when I suggested walking to a nearby playground I had spotted on a run, was “Is it a REAL playground or one in a museum??” 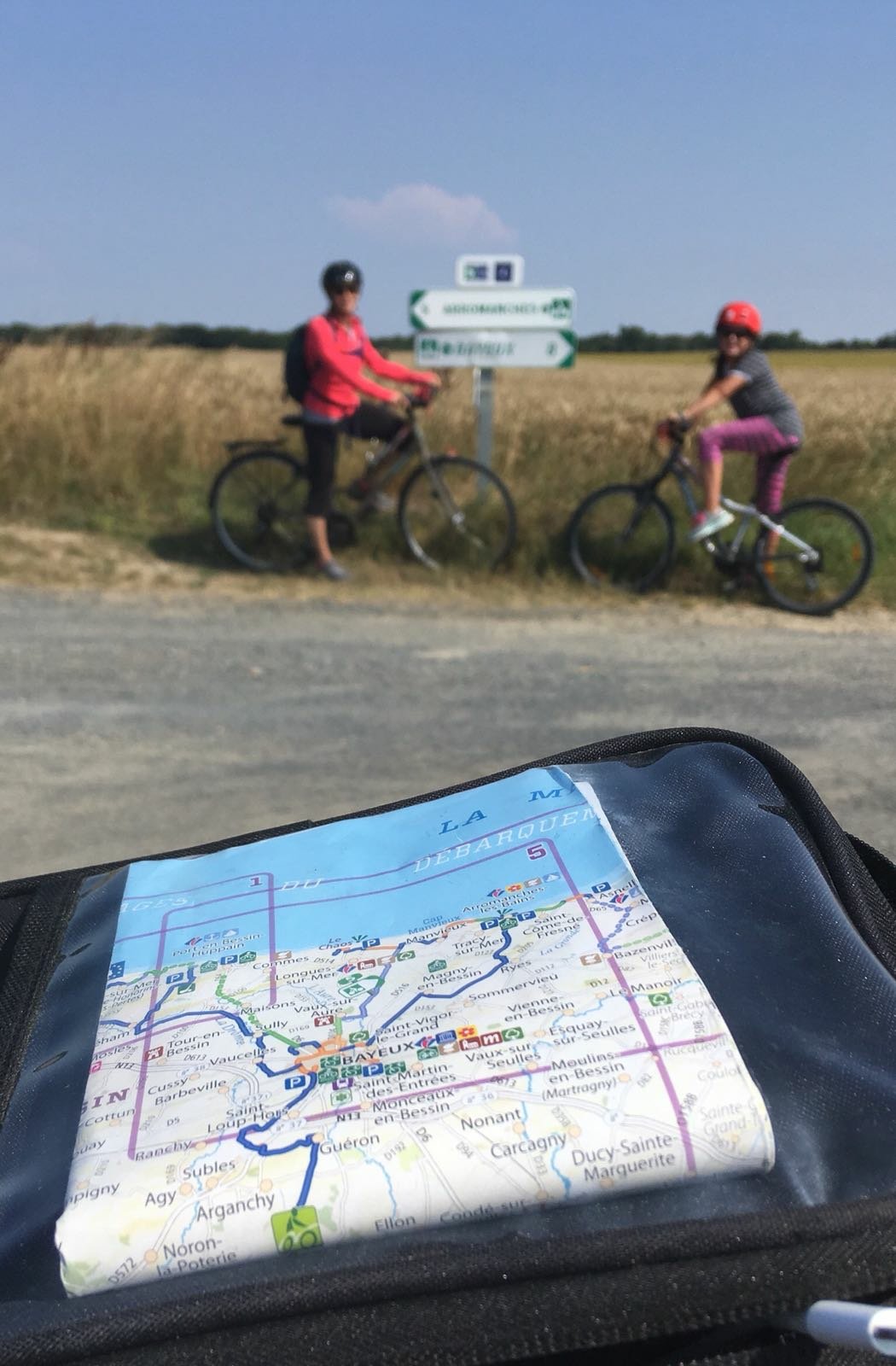 With the girls switching off on the tandem and frequent breaks we biked back on different paths and roads, completing a ~25K loop ride. The bike back was hairier with more cars, farm equipment and trucks speeding along the narrow roads. We were relieved when we found the bike path that would take us back to Bayeux, but still needed to get through town to the bike store and then walk back to our apartment. The very kind bike shop employee we chatted with took pity on the girls – not discrete whatsoever in their overdramatic tiredness – and offered a ride; his excellent English enabled us to enjoy stories of his three young kids and his recommendation for the best restaurant in Bayeux (Au Ptit Bistro), which we took advantage of for dejuner (lunch) on our last day.

Allowing ourselves a week in Bayeux also offered us some time to head off in different directions. Wayne did a full-day WWII tour while I acquiesced to the girls’ desire to embellish their fingernails and visit the candy store. Good thing we didn’t have to rush. If the time required to choose a nail polish color is any indication of future key decisions – say, where to go to college – we’d better have lots of time and patience reserved.

I relished having some 1:1 time with each of the girls. Amelia and I visited the Bayeux Tapestry Museum together (more by default than intention as Wayne & Annabelle were cooling off after a lunchtime standoff); it was really fun to try and follow the story of the Tapestry together. Maybe more frustrating than fun initially, as Amelia alluded to how confusing it all was, but after the audio tour AND the movie AND a few more visual displays we gradually transitioned from deep concentration to the fog lifting and us being able to connect one piece to the next and solidify the roles of each of the main characters: King Edward of England, William the Bastard of Normandy (who became William the Conquerer upon victory), and Harold, the King’s messenger from England whose takeover of the throne after Edward’s death seemed to form the entire basis for the Norman conquest. At the same time, since there had been some allusions to the Tapestry being Norman propaganda, we discussed what we thought might really have happened and formulated our own hypotheses of myth vs. reality. 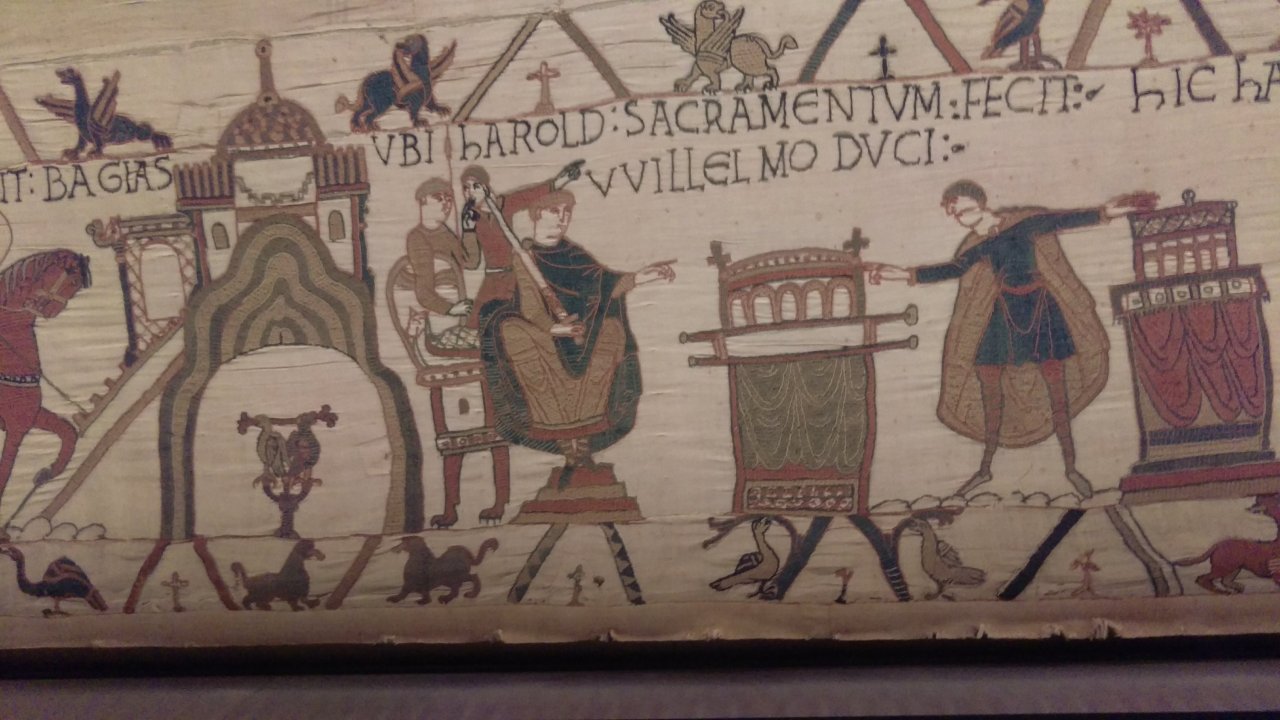 On our last morning in Bayeux I convinced an early rising Annabelle to join me for a workout. Always up for an adventure, she quickly got dressed and we walked to the nearby Place Charles de Gaulle for jumping jacks, squats, lunges and pushups. She was an enthusiastic and goofy workout partner, feigning exhaustion but making up new exercises and leaping off benches whenever possible.

She wasn’t at all intimidated by the guy in the park running sprints and essentially doing the same thing we were (a little more seriously and intensely) on the next bench over. At least we weren’t alone in getting weird looks from the passersby. On the walk home we lined up at the very busy patisserie Maison Lemoisson and spent our coins on still-warm croissants. We reluctantly shared them with Wayne and Amelia back at the apartment and all agreed they were the best we’d had so far in France.

We did manage to do some planning for the weeks ahead. With little time to get our trip completely dialed in before we left Seattle (and honestly little desire to have it too planned out so we could be flexible), we did need to figure out how we were going to get across France from Bayeux to Nice where we were meeting Seattle friends, and where we’d go after that week. We decided to rent a car for the trip since we had four days to get to Nice and planned out our stops – one night in Tours and two in Valence.

We also decided that after Nice we’d stay in France, even though Italy’s beautiful Cinque Terra was so close. When we all really thought about it over dinner, we couldn’t believe that with all we’d seen and done we’d actually been in France less than two weeks. Since getting better at the language and getting more comfortable with the food and culture were goals, then we wanted to stick with it. So we planned to stay in France so as not to make ourselves dizzy with a new country and booked accomodations out into mid-August in Carcassone and Bordeaux. So far the internet has been our friend for this on-the-fly research and reservation, although we recognized that August is definitely European vacation month and, as expected, we’d be spending more because of the high travel season. For now though, we’re all looking forward to seeing our friends and visiting the French Riviera for the first time.