Hanging in Halong Bay, by Amelia

This is a really long blog post, but I wanted to write about our whole experience, so even though it might take some time, read the whole thing!

By the time we left Hanoi, I was ready to leave! My parents loved it, but I was just done. When we were in Thailand, I thought you couldn’t get busier than Bangkok. But boy, was I wrong!!! Read more about Hanoi in Annabelle’s blog post here.

So, we left Hanoi to go on a Halong Bay Cruise. Our tour company picked us up at our hotel in the morning with a van. The ride was supposed to be 3 hours (or 2 hours and 59 minutes, as our guide said). We mostly looked out the window, but we also read too. I was kinda nervous about being on a boat for 3 days, as the only other time was on the ferry to Croatia, and that was only 1 night! Luckily, my parents told us that we would only spend 1 night on the boat, anchored, and the other night in a hotel.

Anyway, when we finally got to Halong, we saw Max and Henry!! We were super excited, cause it’s always nice to mix up the family time, and seeing friends is always great! So, we got onto the boat, got checked in to our cabins, (Annabelle and I had our own), and then went onto the deck to hear about the plan (for the 2nd time out of 5). Don’t get me wrong, our guide was great… BUT he tended to repeat himself at least 4 times, and plan everything out from kayaking (2 hours 27 minutes) to digesting time (4 ½ minutes). I’m not even kidding. We even had a whopping 10 minutes allotted for “go up on the deck and look at the view for romance time.” 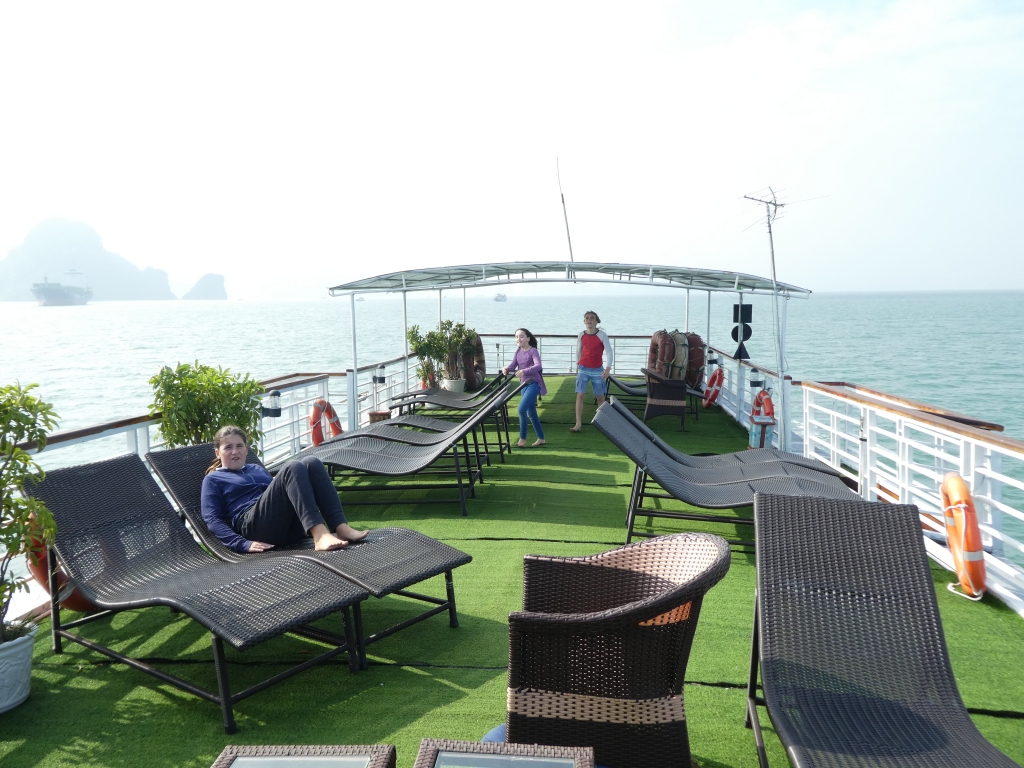 So, after we heard about the plan, we had 9 ½ minutes until we had to go up to the deck, get a quick review of the plan, and then go into the much heard about non-touristy, small adventure cave. When we got there, we had to crawl through some small tunnels, which the kids didn’t have any problems with, but the grownups were having some trouble! We didn’t want to get our shoes wet, so we went barefoot which was a BAD choice! There were so many ouchy pebbles that really hurt!

We went to so many caves, that I was pretty done after the 4th one. The only one that really stood out, was one that had a beach and we wrote our names in the sand, and if you dug deep in the sand, you could find clay that was really fun to play with. All the kids had fun in that cave!

After that, we got back to the big boat, so that we could have 10 ¼ minutes to get ready for kayaking. We heard another review of the rest of the plan on the small boat going to the big boat. We sailed to this little floating shack where they had all of the kayaks. Then, we took off! 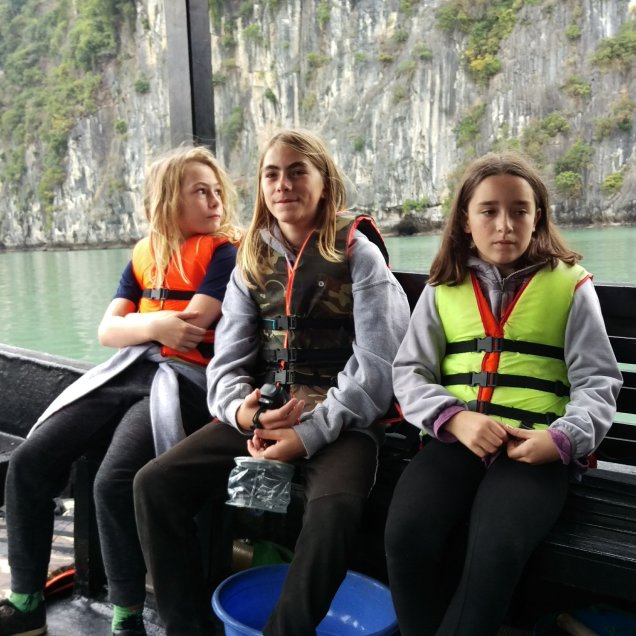 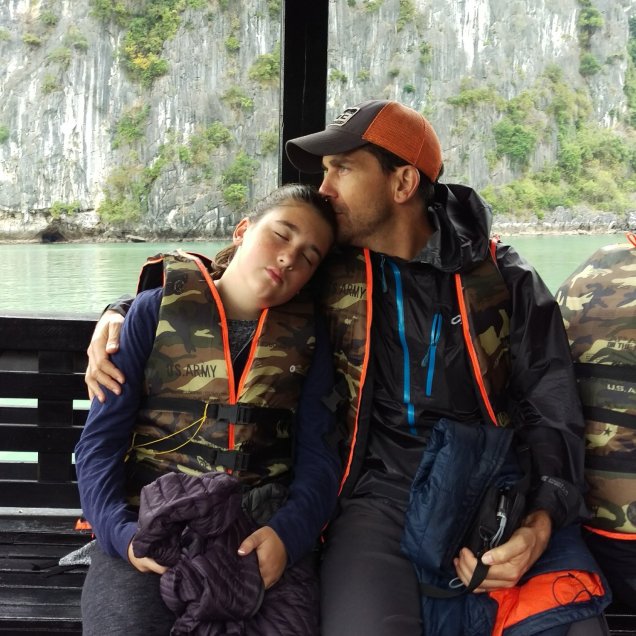 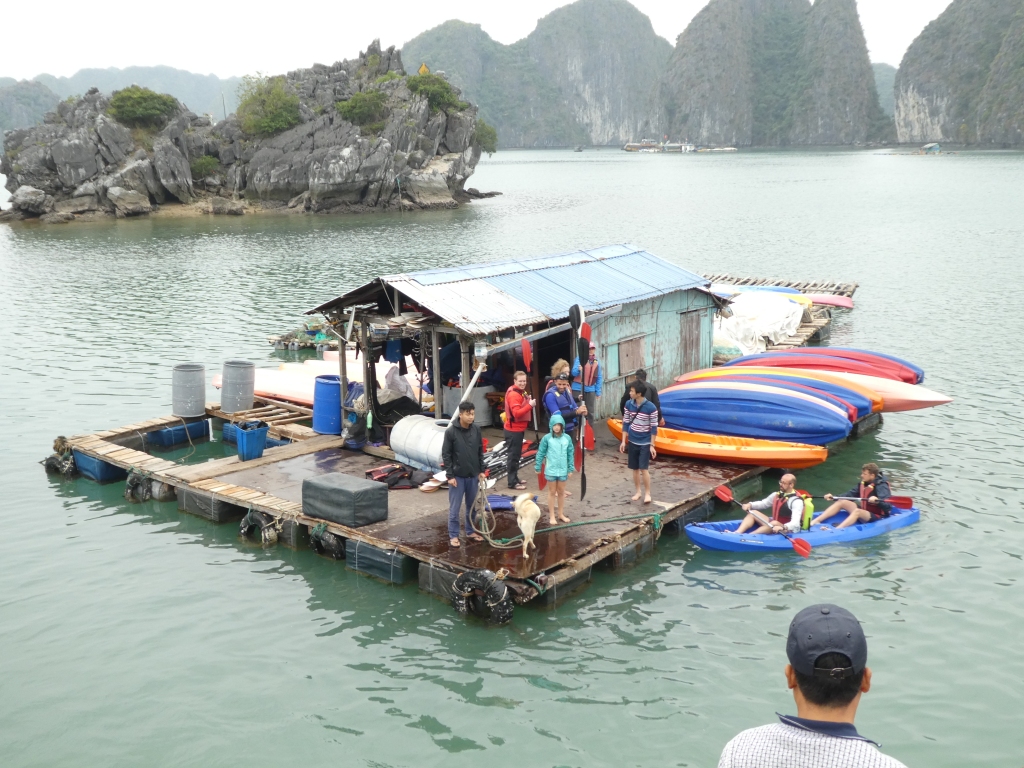 I was in the Kayak with my mom, and we were racing Annabelle and Dadda (we won). We kayaked along all of these enormous cliffs, which was pretty cool, but I was kinda focused on winning the kayak race, so I didn’t really notice the cliffs until we headed back. We got to a small beach where we left our stuff, so we could swim in the sea (even though it was SOOO cold!!). I wasn’t planning on swimming, because it was cold, and our guide had just finished explaining how a couple of months ago there were swarms of dangerous jellyfish right where we were about to swim. BUT, when I saw everyone out there having fun and not getting stung by jellyfish, I just HAD to swim. I was really cold- but it was worth it.

When we got back to the boat we all had a nice burning hot shower. This was a nice surprise, as I was not expecting enough hot water on the boat for us all to shower. Then, we had an AMAZING dinner. When I say amazing, I mean 4 course, vegetarian option, no seafood option, and DELICIOUS!!

After a nice relaxing dinner, all of the kids wanted to learn how to squid fish. Our guide gave us a quick lesson (suprisingly) and then we started to do it ourselves. This type of fishing is quite frustrating because you have no bait, and you just wait around for a squid to be attracted to the red light that is shining above the water. The 4 kids were pretty bored after 15 minutes, so Max and Henry left, and just left their lines on the deck. Annabelle and I were a little more patient, but we were also starting to get really bored. Luckily, some of the funny adults that were also on our cruise came out and wanted to give it a try too, so they gave us great company. After about an hour, the captain of the boat came out, and put in a line. After about 2 minutes, we suddenly saw a big black cloud in the water, and he pulled up a squid. Literally. Like, that’s just mean. Anyway, I tried for about 15 more minutes, and then I was D-O-N-E DONE! I went to go get ready for bed, and out of nowhere, I heard a shriek, and then some excited yelling. One of the adults had caught a squid. I swear, Murphy and his law are out to get me. I went to bed after that in a suprisingly comfy bed, and had a good nights sleep, dreaming about ONE DAY, catching a squid.

The next morning we had to wake up early so that we could be the first ones to this huge, pretty, and touristy cave. After breakfast, we put on our shoes, and got off the boat to look around. This cave was crazy! It had streaks of rock that were all different types of oranges, yellows, and reds. It was also HUGE! It was definitely the biggest cave I’ve ever been in!

After that cave, we transferred to a smaller boat, one that didn’t have rooms and a nice enclosed indoor space. It was freezing on that boat, and I was wearing all of my warm clothes. We sailed towards Cat Ba Island where we were going to bike and hike. We got the bikes, and biked around and up and down the island. There was a small village on the island that we got to see too. Then we went on a hike. Our guide asked us if we wanted to do the harder, more adventourous hike, or the easy, boring hike. You guess what all of the adults wanted to do. That’s right, the harder more adventurous hike. To be honest, it was the easiest “hard hike” that I’d ever done. I don’t even think it was a mile up and down. I mean, I am from Seattle, where we are surrounded by hard, adventurous hikes all the time, so I have pretty high standards.😋 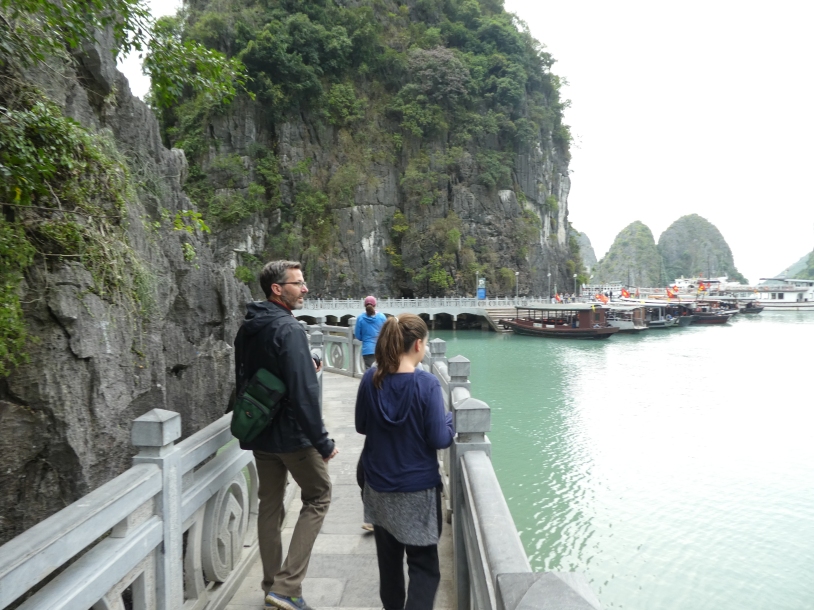 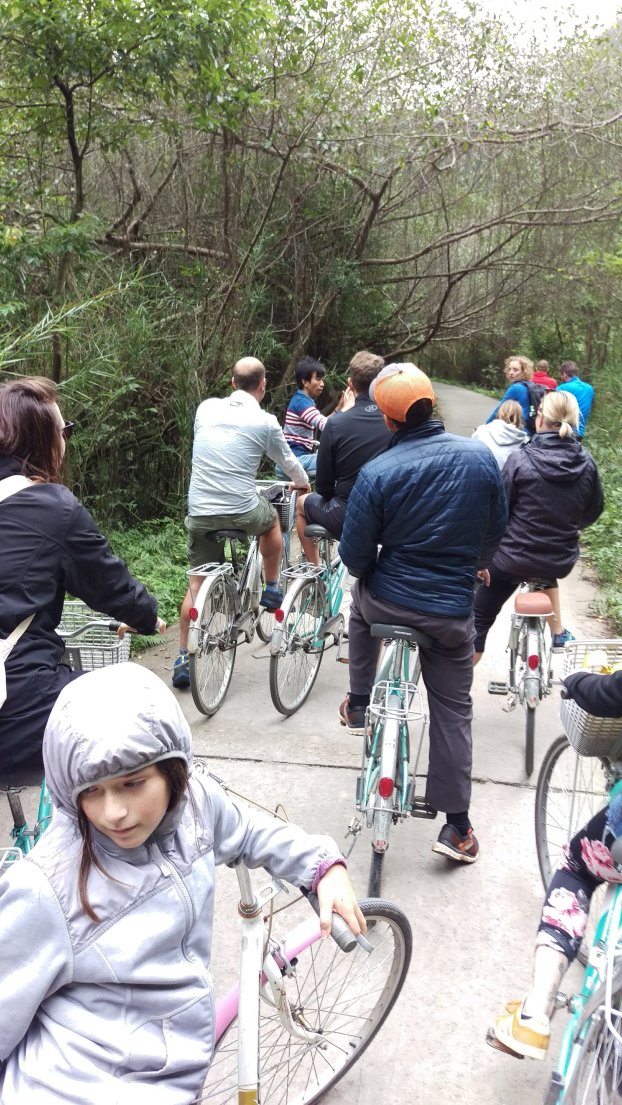 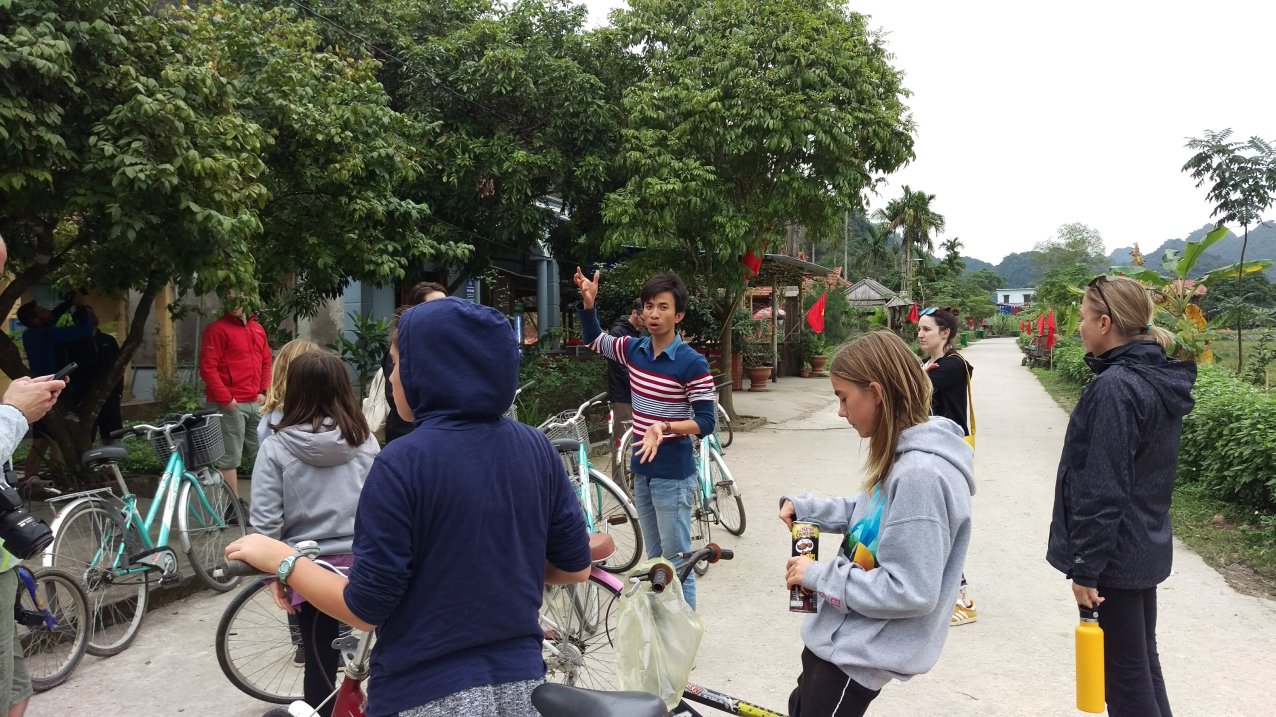 We biked back to the small boat where we had lunch, which was really good. Then, he told us that we were going kayaking again! I mean, we had known we were going kayaking since the van ride to the Bay, but it really sunk in that he wanted us to go kayaking in the freezing weather! My dad, Henry, his dad and I stayed back, because there was no way on earth any of us wanted to be close to the even colder water. Mama and Annabelle and Max and his mom went out along with all the other adults and our guide. When they got back, people started SWIMMING!! What the heck! Max even did a flip off the roof of the boat. People are crazy.

We transferred to a smaller boat and sailed through a fishing village to Cat Ba Island (where we were spending the night). By the time we got there we were all chilled to the bone. The hotel had a really funny name, but it was still a nice hotel. The hot shower felt so good, and it warmed us all right up. We went to dinner at a good restaurant, and at dinner, we braided Max’s and Henry’s hair! When we got back to the hotel, the parents went to go get a beer, while all of the kids watched try-not-to-laugh YouTube videos. 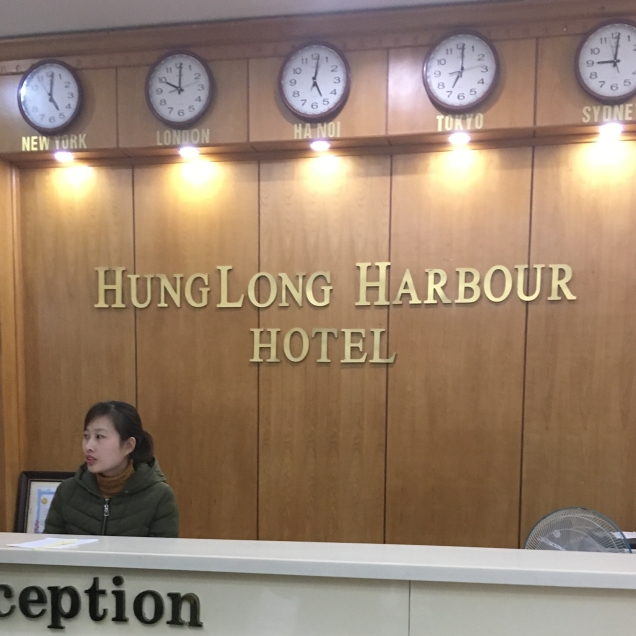 We had a nice night in the hotel, but we had to wake up early AGAIN, so that we could get back to the Bay earlier, so that we could get back to Hanoi at a reasonable time. We got back on the small boat, and sailed for a couple of hours, then we transferred to the big boat. On the big boat, we played a card game called Bull Poo (the kids name) with the adults, which was SUPER fun. Then we taught them how to floss, which is a dance. Before we knew it, we were back at the Bay. We had a nice drive back to Hanoi, and this time it was better, because we had friends on the bus! 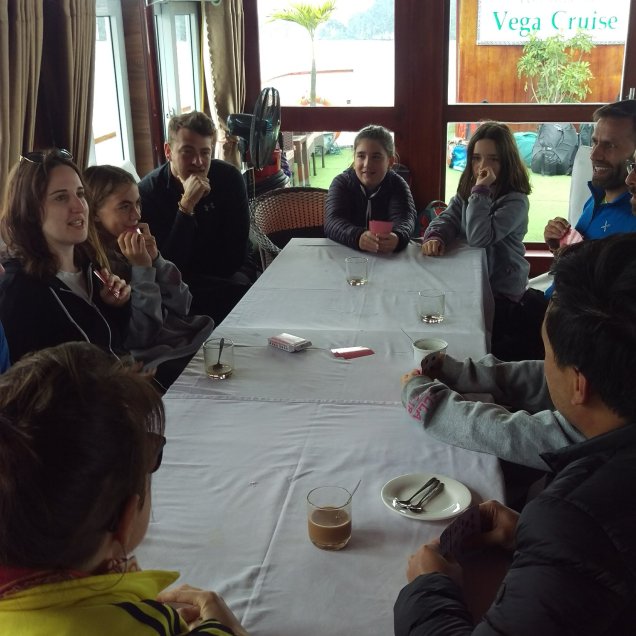 When we got back to Hanoi, we walked around Hoan Kiem Lake and went to Legend Beer for dinner, before Max and Henry had to leave for the Philippines. When they left it wasn’t that bad because we knew we’d see them again in Hoi An. 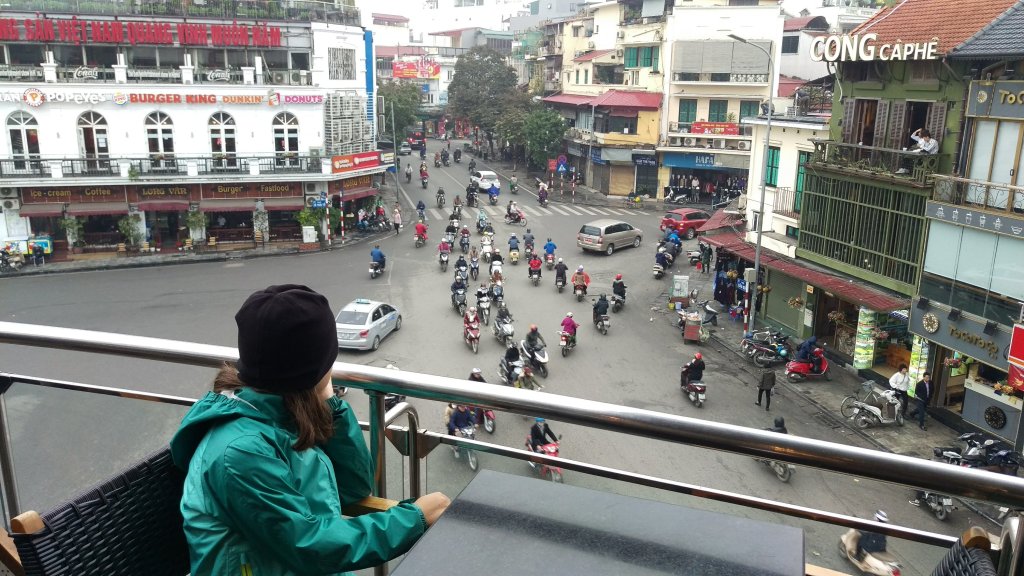 So, all in all, this cruise was really fun, and as always, like everything, it was way better with friends.