The Loi Krathong Festival, by Amelia

Sukothai was one of my favorite places on this WHOLE trip so far. That’s saying a lot, cause we’ve been to A LOT of different places! One of the reasons why it was my favorite, is because of the lantern festival. For the whole week while we were there there was a festival going on not far from our place. 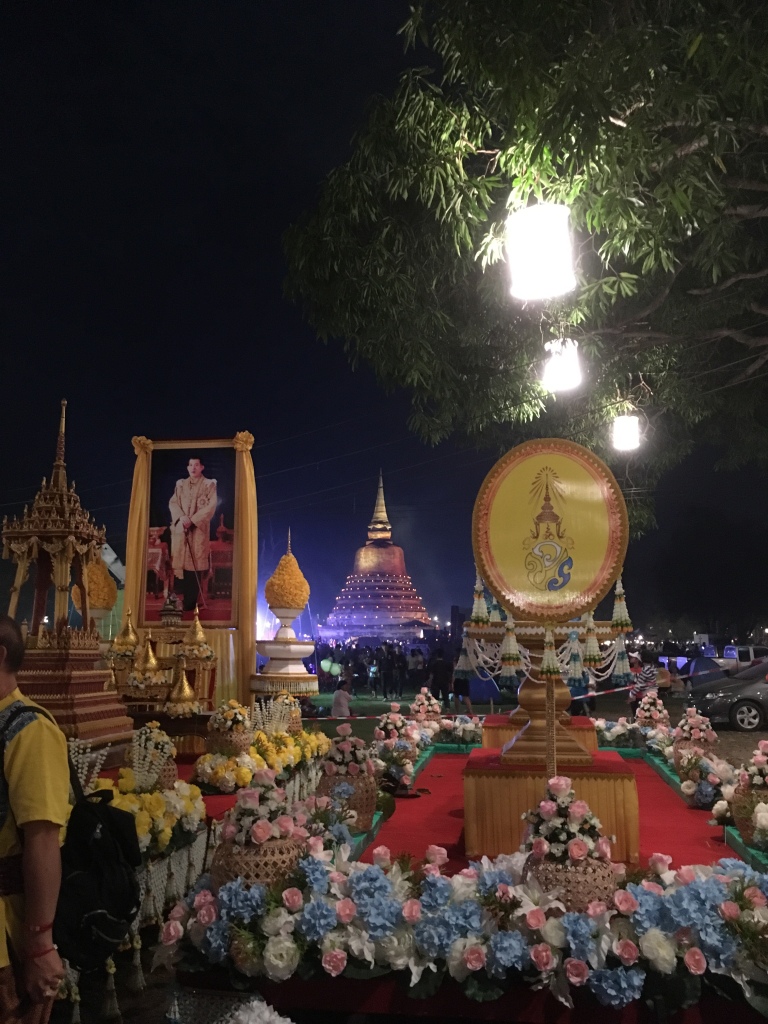 The Loi Krathong Festival is the festival of floating lanterns. This festival celebrates the last full moon of the year (using the Thai lunar calander).This festival takes place all over Thailand, and each place has its own customs. You may have heard of the version where people release lanterns into the sky. In Sukothai, instead of releasing lanterns into the sky, we released little boats with incense and candles onto the water. Whatever version you are doing, it all symbolizes one thing: Releasing your worries, mistakes, stress, etc. Supposedly, when you release your lantern or boat, it leaves you with a clean start for the new year.

Anyway, we went to the festival almost every night we were there. It provided good food, (especially coconut ice cream👍) an amazing atmosphere, and really cool handmade crafts. 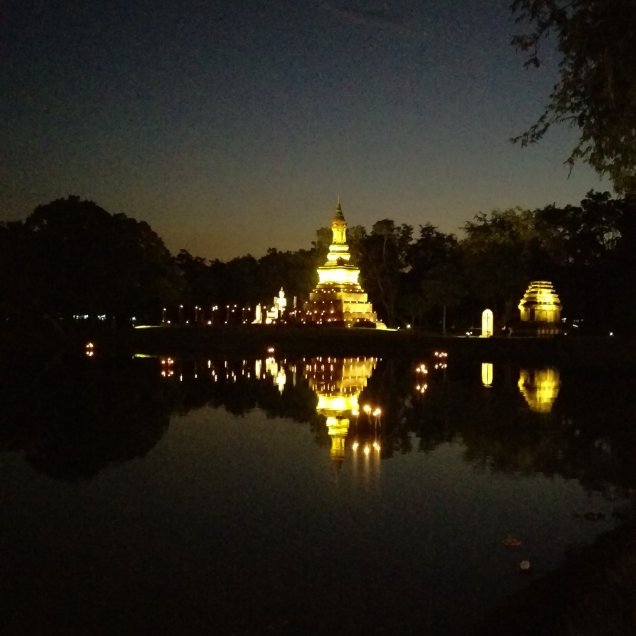 There were SOOO many stands selling the Krathongs, so we decided to look. We wanted to pick out the designs we liked so that on the real day we didn’t spend hours looking at all of them, trying to decide (believe me, it’s possible).

One night that we were there we went to the light show, which was in Thai, but we think it told the story of Sukothai. There were lots of lights, fireworks, and fake fighting involved. It was AWESOME!! (It was also CRAZY hot!!!!!!!!!!!😰😵) The only non-awesome thing, was that they used elephants for fake-fighting, and at the end, the elephants were taking pictures and begging for money.😑😖😫 Luckily, elephants are now being rescued from these situations! (Read Annabelle’s post about Chiang Mai!)

As the week progressed, the festival got busier and busier. On the main night (the full moon) you could barely walk without being pushed up against someone, or nearly getting run over by a trolly coming through. The crowds also didn’t help the hot/humid situation. I swear it was at least 10 degrees hotter when you were walking through all of the steaming food stalls with all of the body heat.😰😫

On the night of the boat launch, we reveiwed our choices of Krathongs, and picked our favorites. 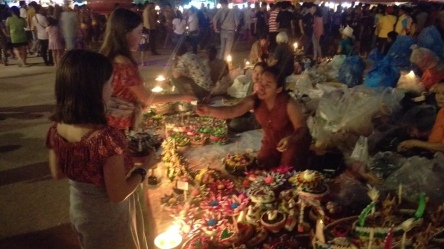 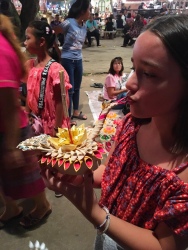 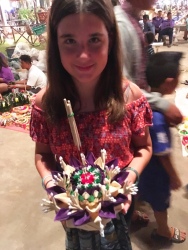 In SE Asia it’s common to barter for craft items, but the Krathongs that we wanted were really cheap. All of the Krathongs at the festival were made by hand, so it felt wrong to pay about $1 (or 20-50 baht) for the Krathongs, and it felt even wronger (is that a word?) to barter, so that you only pay 50 cents. Especially considering that we had seen people making the Krathongs, and it seemed like they took a lot of time to make!!

So we decided to pay the full price for each of our floats. Then we walked to the lake to release them (not the small pond in the photo above). Before we released them, we saw someone’s float getting chomped on by the millions of fish in the lake. We realized later, that you could buy edible floats made of cheetos and ice cream cones and thought maybe it was comforting to see your worries and mistakes being viciously chomped??

Anyway, we lit our floats and released them. It was a cool experience, and it did make me feel like I had a clean slate. 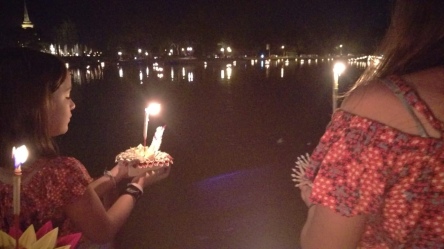 We watched our floats for awhile, and we had to push them out again a couple times, because they got stuck.

It was so busy it took us awhile to get to the exit, but we didn’t mind because we loved the festival. We were sad to leave, but are so grateful that we got to experience this amazing festival.