Old friends in the Schwarzwald by Wayne

Back in the late 90’s I worked here in Germany for Audi AG; a 12-month ‘Practicum’ with the Audi Sport team working on Audi’s first Le Mans 24hrs contender – the original Audi R8. It was a stunning year but certainly, not all rose petals and rainbows. I essentially lied to get the gig – saying I could speak German – and spent my first month feeling WAY out of my depth, horribly lonely, and stupidly homesick.

It could have ended quickly and miserably were it not for the friends I made while I was here and Markus was one of the best.

I think it’s fair to say that the English have a complicated history with Germany, a complexity often fomented by tabloid media and tempered by repeated international football defeats. Even after my year of travel and cultural re-education while backpacking at 21, as hard as I tried, I still entered Germany at ~25 years old negatively biased and a little intimidated. Markus changed all that.

Markus made it easy for me to better understand contemporary Germany by helping me experience it to its fullest. Yes, this often meant too much beer, and too many Schnapps on ‘school nights’ but we were in our 20’s and we didn’t care. Markus and I had a blast. Markus shared his home, his friends, his family, and his Schnapps with me, while simultaneously sharing local ‘Swabish’ cultures, traditions, and festivals. Markus loved showing off his home, and I loved learning about it. We became good friends simply because we recognized something that often gets lost in translation or redacted in the media – a silly something really – we realized we were more similar than we were different.

Markus and I had not seen each other for 15 years (Since Della and I were married) and since then much has changed (5 children between the pair of us for starters). I was excited to meet Markus and Anna again and meet their kids for the first time. Markus kindly offered to pick us up at the station and as soon as we met, just like that, we were back in 1999 as if no time had passed at all.

Thank you Markus, Anna (and of course the kids) for your hospitality, warmth and kindness.

Before we arrived Markus had warned us to be hungry, that he was preparing a ‘real’ German lunch and we’d need empty bellies. He wasn’t kidding. Three courses, all delicious and all prepared by Markus. This guy has skills, and it’s (more) evident now that I do not. 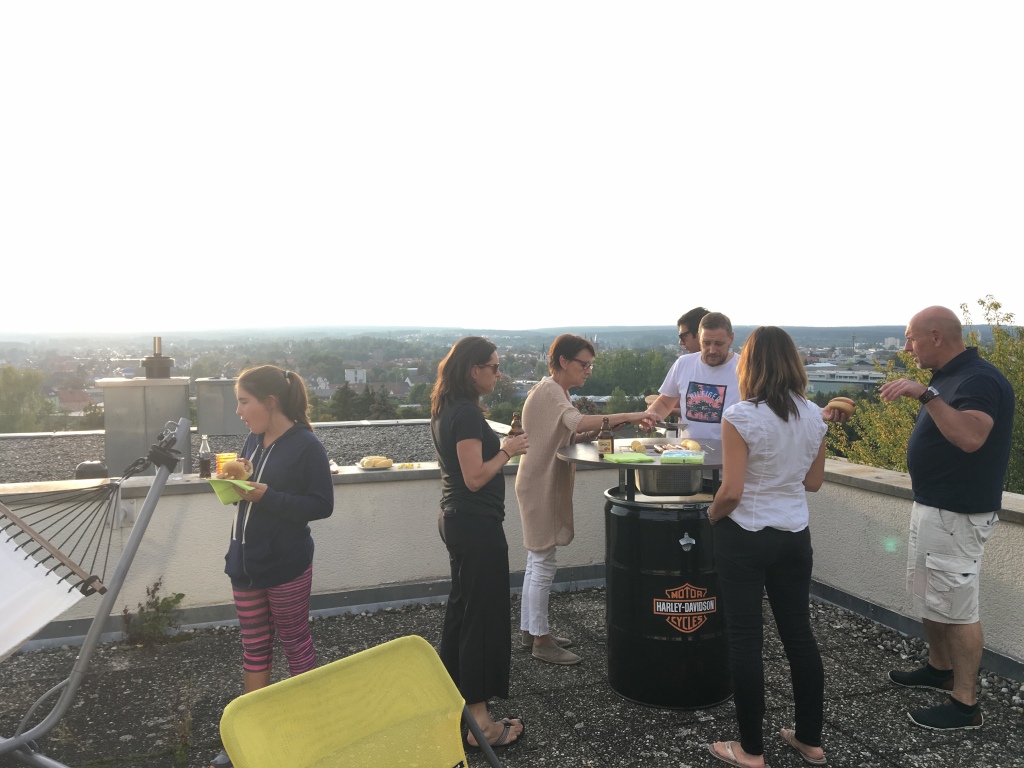 From Villingen we traveled to Triberg and did a high ropes course. This was easiest the highest high ropes course we’d ever seen and was quite intimidating. It wasn’t easy but we made it through in one piece. The ‘most awesome’ award however goes to Anna who faced her fears (this was her first time on a ropes course) and flew through the level 5 zipline course screaming ‘girl power’ loudly (In German) and loving every minute of it. Thank you Anna for inspiring my girls with your courage.

Another traditional German lunch on the back deck. Bread, meat, and cheese what’s not to love?

Another day, another fun excursion. Football (Soccer) golf! Who knew this was even a thing? Tons of fun in a beautiful setting. Markus won, of course 😉

On our final night, we went for dinner at the Oventhutte. Another traditional feast with an array of foods I couldn’t possibly pronounce but had no trouble eating.