Temples, Tourists and Tarantulas – the Angkor Experience, by Wayne

The S.E. Asian chapter of our trip was coming to an end but we couldn’t leave this corner of the world without visiting the Angkor temples in Cambodia. Just an hour flight with online-pre-approved visas in hand, the journey from Saigon to Siem Reap was quick and simple.

Our welcome to Cambodia was beautiful. With the sun going down and the warm wind in our hair we took a tuk-tuk from the airport to our hotel. We rode “home” excited, absorbing the new sights, sounds, and smells of a new city in a new country.

Before visiting the main temple sites of Angkor we visited the Angkor National Museum in Siem Reap. It’s impossible to fully appreciate the history of this region in just a few days, and the museum presented a wealth of information that made our time at the temples more valuable and more enjoyable. With self-directed audio tours and a ton of fascinating displays, we wandered through slowly, taking full advantage of the air conditioning.

Imagine for a moment… Indiana Jones and Lara Croft, Buddhist symbolism and Hindu gods, crumbling jungle temples, and wild monkeys. Then imagine all this wrapped in tropical heat and humidity. This just about sums up everything cool (and expected) of the Ankor experience. More on the unexpected later…

From a very different time 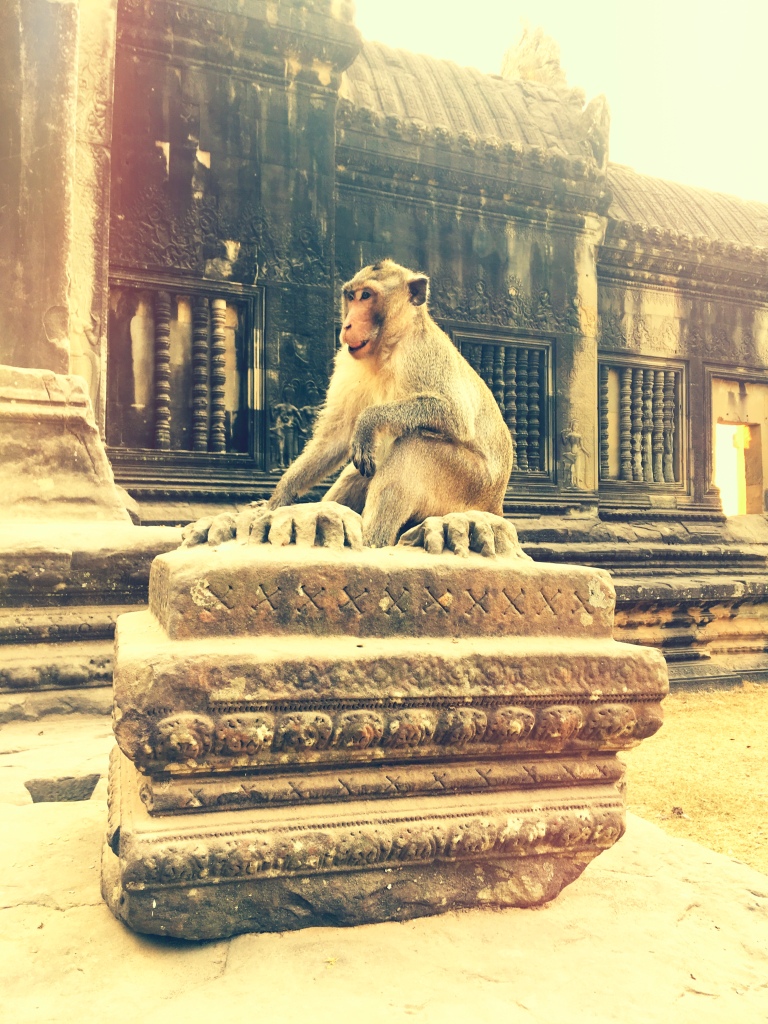 Fun to watch, but don’t get too close. these are mean little buggers 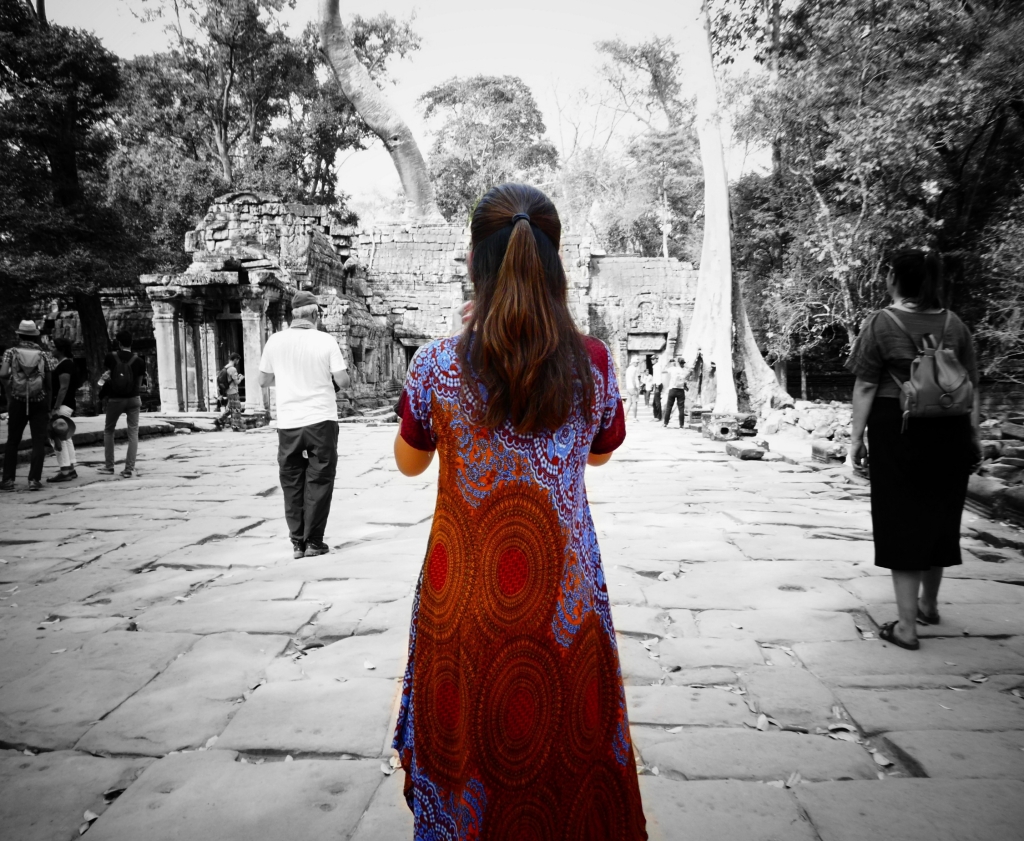 It doesn’t matter if you’re devout or secular, if you’re Christian, Jew, Muslim, Buddhist, Hindu, or none-of-the-above, entering these ancient buildings will raise the hair on the back of your neck and leave you open-mouthed asking – How?! Why?!

In simple terms, the entire Angkor site represents a collage of recycled history. A build it, worship it, evolve it, cycle of religious beliefs, and cultural evolution. With the natural passing of each king (or murdered king), a new king would come along, usurping their successor’s legacy and building anew. Either atop of or beside an existing temple, the new king would build something bigger, bolder, or with a twist of something unique. This rinse and repeat cycle resulted in what we experience at Angkor today… the single largest complex of religious buildings on earth.

Trees and branches ooze through many of the ancient ruins. It was sometimes hard to know how any of it kept standing. Were the trees preventing the crumbling rocks from falling or were the rocks providing support the trees needed to stand? It was surreal.

Exploring the ruins was a thrill. We felt like kids playing in a labyrinth. Behind every corner or in every crevice you’d discover something special, something new. No two temples were identical, and no two nymph carvings were the same.

Can you find the hidden face?

The obvious impact of artists throughout ancient and modern history has been a theme that has repeated itself time and time again on this trip. Whether while walking through the Vatican, Louvre or Uffizi museums and seeing the visual evolution of Christ, or the thousands of iterations of Buddha’s form and evolving symbolism in S.E Asia, its been incredible to see how artists have helped define, through painting and sculpture, our collective cultures for… well, forever. 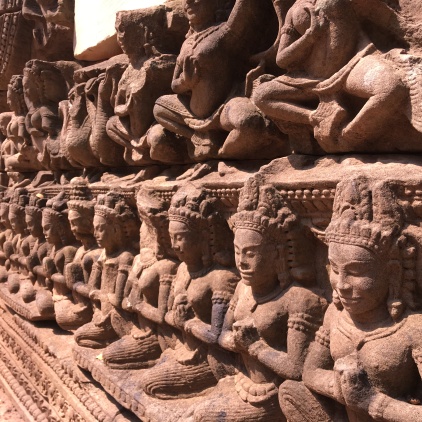 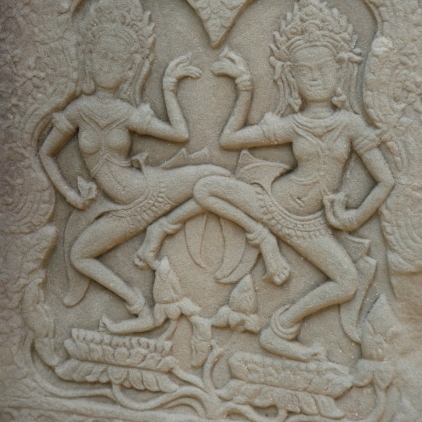 To learn more in the limited time we had at the main Angkor site, we hired an awesome guide named Rav (thank you, Julie, for the recommendation). Rav spent the day driving us from site to site in air-conditioned awesomeness. Not just a driver, Rav was a wealth of information who spent the day patiently answering a million questions and keeping us hydrated. Exploring Angkor was thrilling but by 2pm the heat began limiting our ability to enjoy it. Even though we moved between sites in a car, and Rav always managed to find us a sliver of shade to stand in while he explained an architectural feature or told a king’s story, the heat and sun became overwhelming. The girls did their best to listen and be respectful, but by early afternoon my Seattle girls were verging on heat exhaustion. 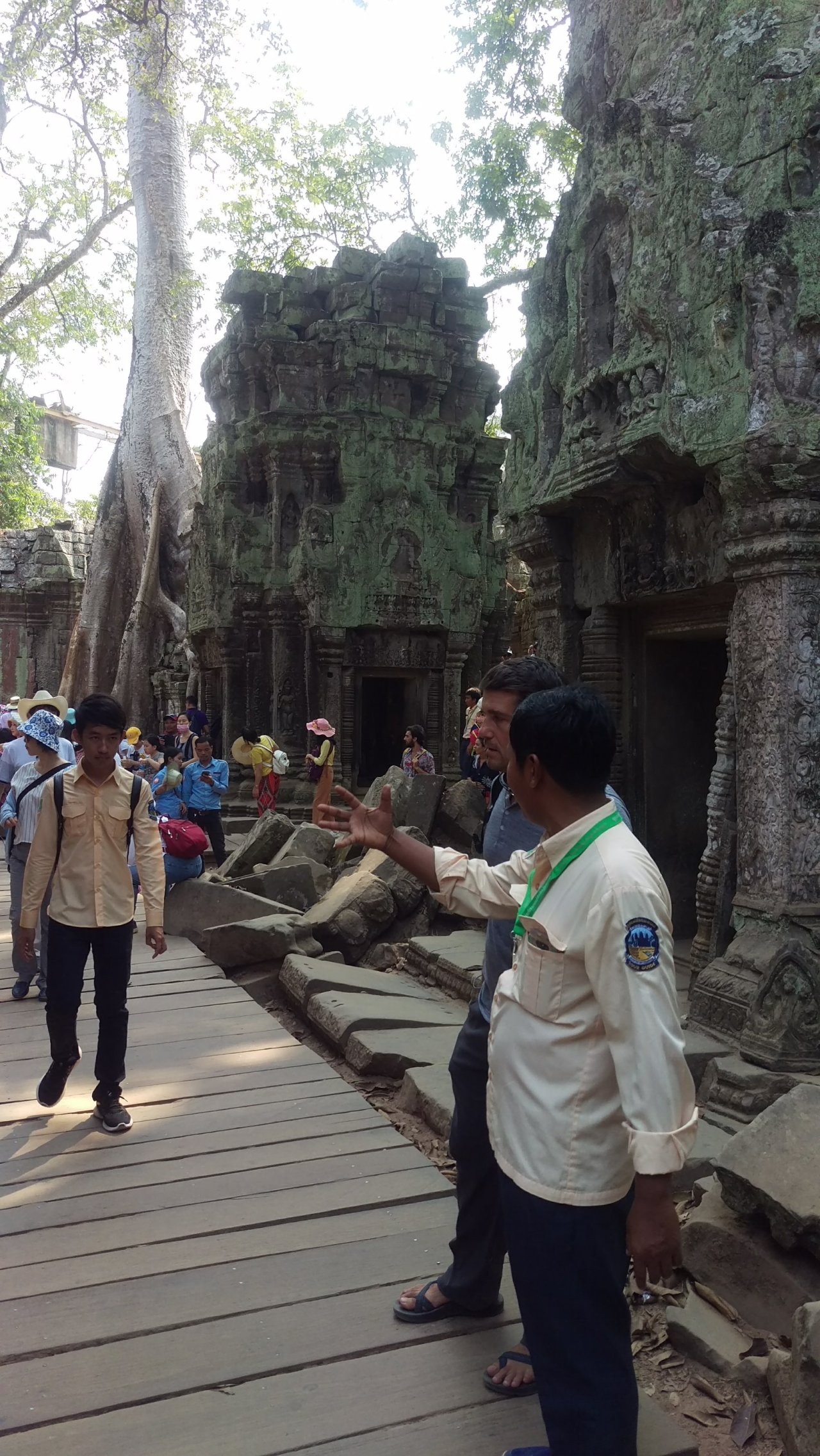 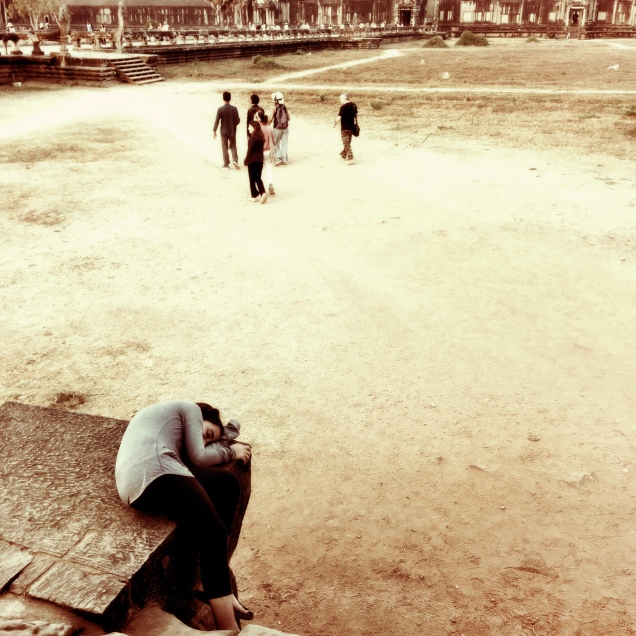 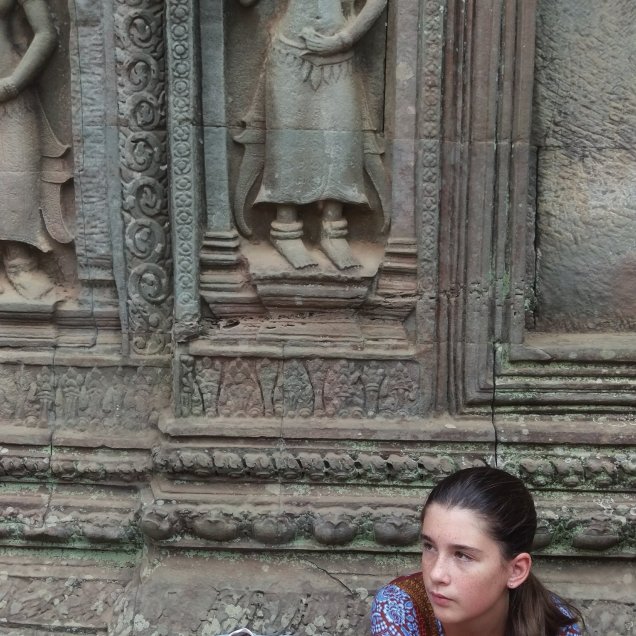 Christiana and I could have toured the temples for three days straight but that wouldn’t be possible this trip. The girls enjoyed the museum and learned a lot on Rav’s guided tour, but after a couple of days, they were “temple’d out” tired, hot, dusty, and ready to move on.

Side note on long term family travel and compromise: Compromise has been a constant companion on this trip. Individually none of us ever fully get what we want from any place or experience. I could have explored Carcassone for another three weeks, Christiana could have eaten her way through every food market in Bangkok, Hanoi, and Saigon. Amelia could be content reading on the banks of Lake Garda every day for a year, and Annabelle could browse craft stores for hours and hours. We’ve juggled the needs of the individual with the needs of the whole, but someone always inevitably ends up frustrated. But… that’s okay. Having to compromise so much and so often, has opened our minds more to each others’ ideas and perspectives in new, and I think more sustainable ways. We’re more attuned to each other than we were before. That being said, the process of compromise has gotten a whole lot louder than it was before.

Sunrise at Angkor is one of those bucket list must-dos, so we all, surprisingly, had a lot of excited energy on the morning we awoke at 4:30am to see this spectacle. Shrouded in darkness with the kids dozing like zombies, the 5km tuk-tuk ride went fast. Anticipation was high as we crossed the main causeway and headed to the northern reflection pond inside the Angkor Wat complex. It was still dark when we arrived and navigating the cobblestone roads and pathways was difficult. I pulled out my phone and turned on my flashlight. Doing so I quickly realized that others (many others) had had the same idea. Like being at a Beyonce concert, there were bobbing cell phone flashlights all around us. We were surrounded and we hadn’t even known it! 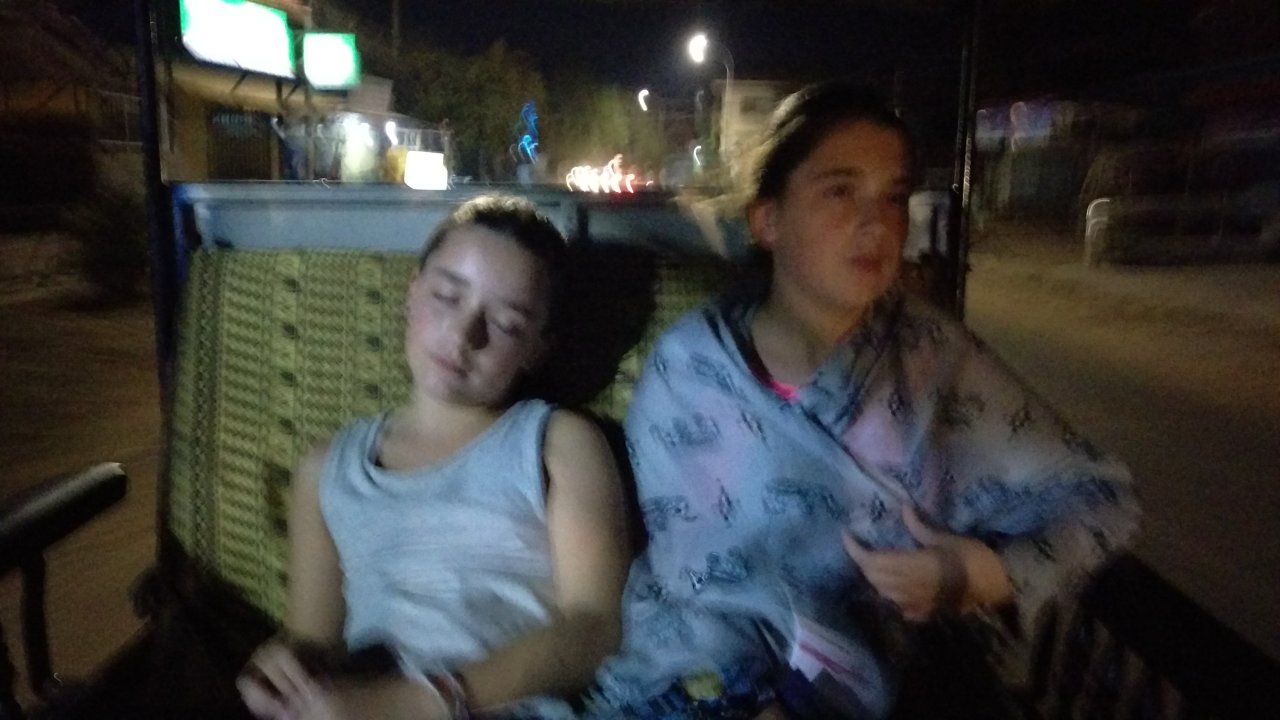 The Sunrise was nice. A special experience that I’m glad we made the effort to see. But as the new day emerged and the army of fellow sunrise devotees exploded in full color around us, I found myself more enthralled in the forest of selfie sticks that surrounded me, than in the rising sun. 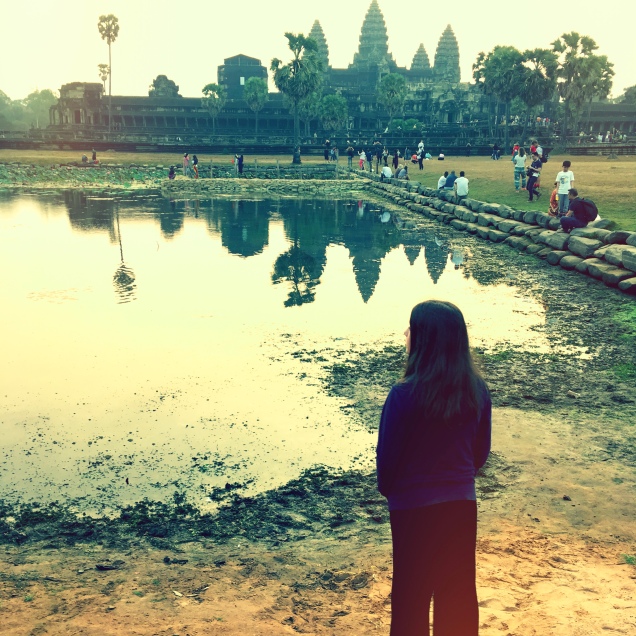 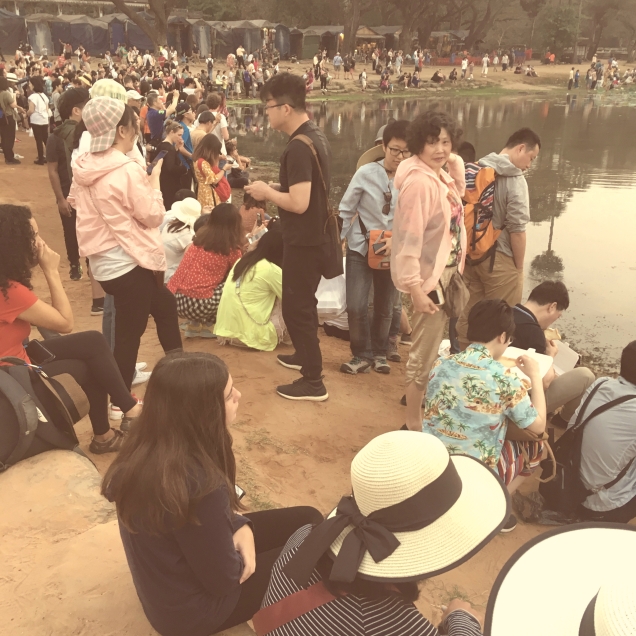 So far on this trip, expectations of a place have rarely matched reality. These mismatches are normally positive and pleasant surprises – sand dunes in France, bakeries in Croatia, food on Vietnamese trains, etc. But sometimes these mismatches are more disappointing. For some reason, my internal struggle (and hypocrisy) with over-tourism spiked in Siem Reap and was totally unexpected.

The tourism machine is well oiled here. With a ticket for three days costing $62, someone somewhere is making some serious bank. At a site so large, you shouldn’t feel crushed, or rushed, but at the main sites of Ankgor that’s how I felt all the time. The crush of tourists made movement in and around the temples almost impossible and the vans, tuk-tuks and taxis left the main arteries around the sites clogged and congested.

It got frustrating, but a little introspection reminded me that I was part of the problem, and I had been for the past eight months. I needed to stop complaining and get better at sharing. I’m working on it.

The world is full of amazing places and beautiful things. People naturally want to be inspired by these special places and why shouldn’t they? After all, inspired people are better people and better people make everything better right!? 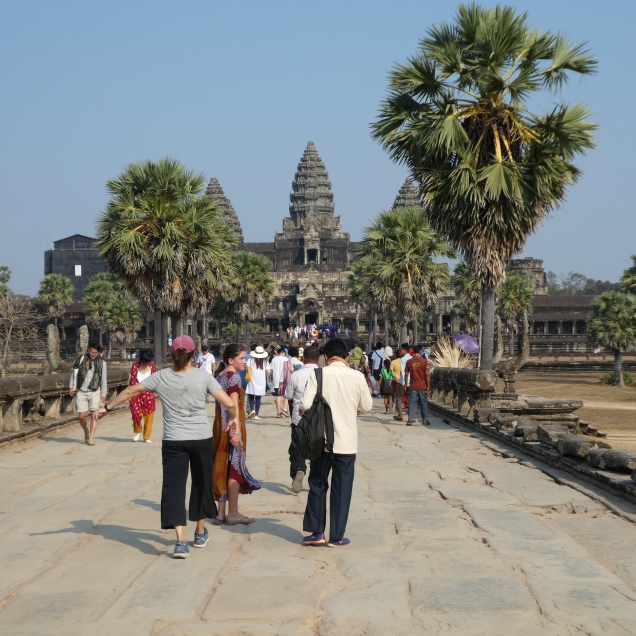 We met up with the Wallace Family Reboot crew! The Wallaces are another traveling family we first met a few months ago in Chiang Mai, Thailand. Two parents, FOUR kids traveling the world indefinitely! What’s not to love about that?

We ate vegetarian food and strolled the markets of Siem Reap. The kids roamed and the adults compared notes on traveling highs and not-so-highs. Oh and yes ….. I ate a tarantula (as did Mekhi). We miss you already Wallace crew! 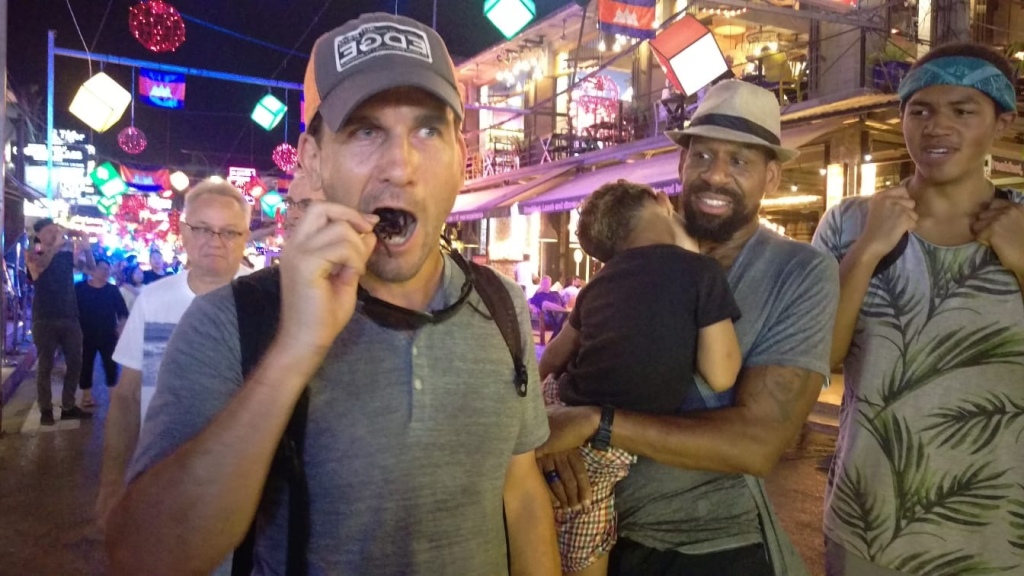 Thank you for reading… See you in Kuala Lumpur!