A Few Days in Toulouse, by Christiana

From Bordeaux we took the train back south to Toulouse for a brief stay. We had heard from our hosts in Carcassone that Toulouse was a really nice town to visit; “Even better than Montpelier!” they said. We also needed a place to stopover before starting our farm stay on Aug 23, which was about an hour’s drive from Toulouse, and were trying to figure out a car rental so we could pick up and return to the same place and then fly north to Frankfurt, Germany after the farm stay. We’ve liked being flexible with our travel plans but it also means that Wayne and I need to regularly spend time on the logistics. Toulouse gave us some time to do that but also was indeed a nice place to visit.

We found an Airbnb near the Place du Capitole, along a narrow alley filled with shops. Thank goodness there was a Claire’s right across from our apartment (parents of tween girls who’ve also stood outside this cheap earring store for hours can sense my sarcasm), where new hair bands and a bunny ipod case were purchased. We learned that Toulouse -like Bordeaux – is on the River Garonne, has a University that was close to our apartment, and is the world headquarters for Airbus.

View from our apartment

An unusual sight for a Seattleite: Airbus headquarters! 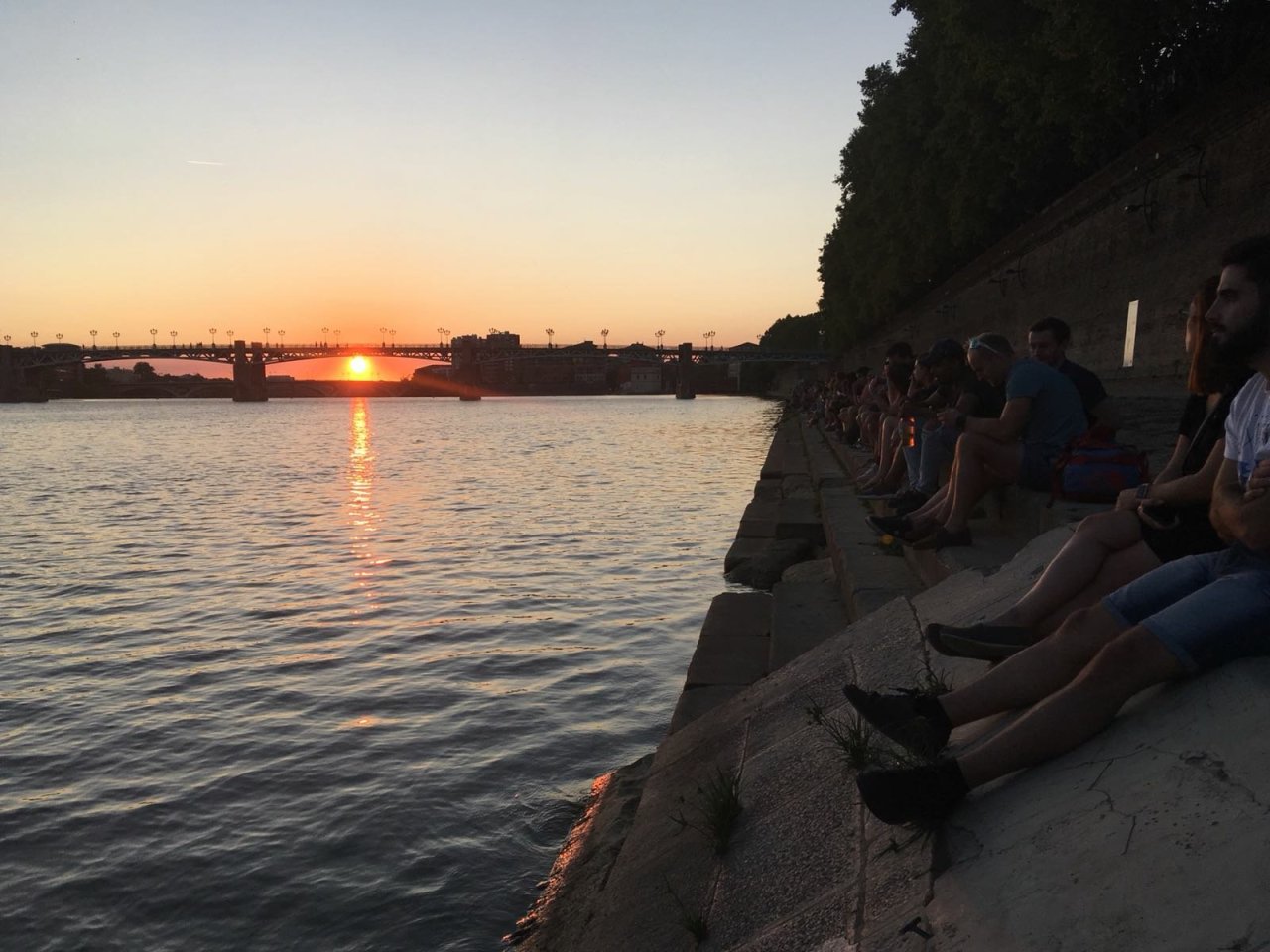 Sunset over the Garonne under the Pont Saint-Pierre de Toulouse

Annabelle quickly mastered the Nespresso maker – since being in Nice she realized that she LOVES to make the coffee for mom and dad with these fancy espresso machines. This one was extra special in that it had a milk frother+warmer so she could make us lattes every morning. With Annabelle’s skill and the ease of espresso-at-the-push-of-a-button, let’s just say we were well caffeinated.

Annabelle’s pinky injury didn’t stop her from mastering the Nespresso. 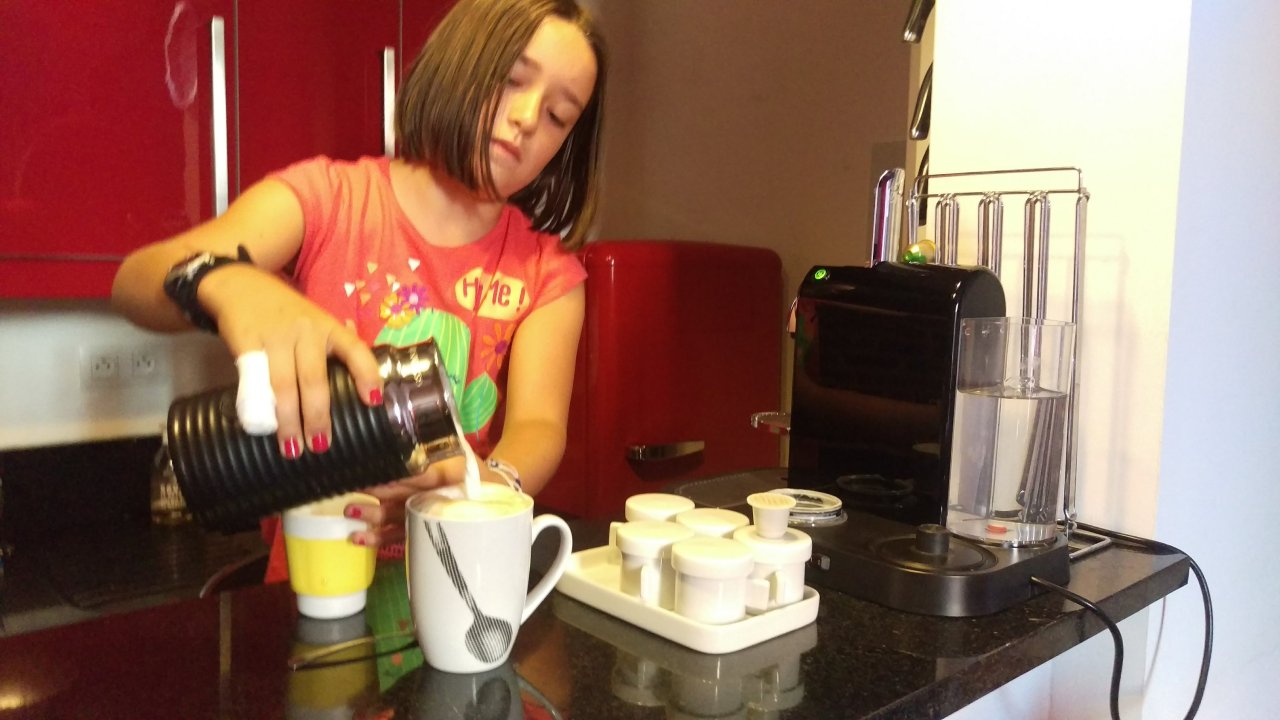 Really mom? This is your third latte already. Last one!

It was quite hot in Toulouse when we were there so we were very thankful for the apartment’s air conditioning, the nearby fountains, and the relaxing shade (and glace) within the Jardin Royal and Jardin des Plantes.

No doubt a very important person from Toulouse. We forget who.

Girls avoiding the side spray techniques of the little kids who cracked up whenever they managed to soak a pedestrian.

E-Readers and shade and neon glace in a cone.

In every city in France we’d been to, we’d seen the little white trains packed with tourists slowly meandering through the landmark areas. On one really hot day we decided to finally go for it and do the Toulouse train tour. At 20 euros for all of us it was worth the 1.5 hours of shade and English-speaking headphones.

On the little white train rumbling through the small alleys of Toulouse.

I got a nice run in (see Where I’ve Run, France Edition) and was able to practice more French with the locals, while Wayne did an amazing job resting from a foot injury he picked up in Bordeaux. Personally, I would have gone bonkers and been really cranky, especially in the heat, so I admired his gritting his teeth for the week.

Trail along the canal with parked long boats.

We got mentally prepared for our farm work ahead and read the “Moulin Manual” that the owners had sent, sketched out the rest of our European tour, booked a car for use during the farm stay as well as flights to Germany afterwards, and generally used the time to mix sightseeing with planning (and browsing at Claire’s). 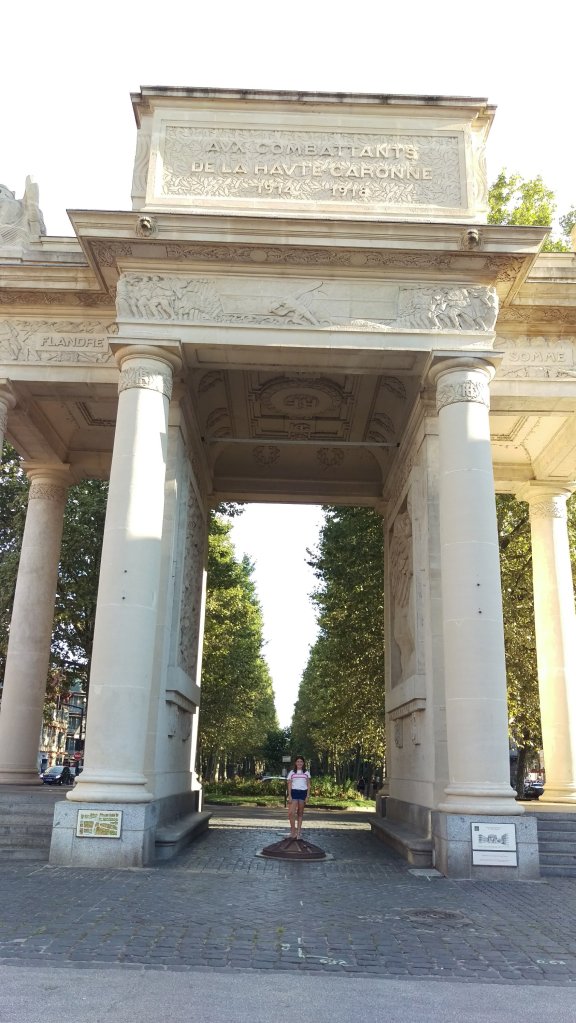 We also talked a bit about the upcoming start of school back home and thus our thoughts on starting “school” on the road. But before that, Annabelle and I made sure we took a ride on the merry-go-round on our way out of Toulouse. 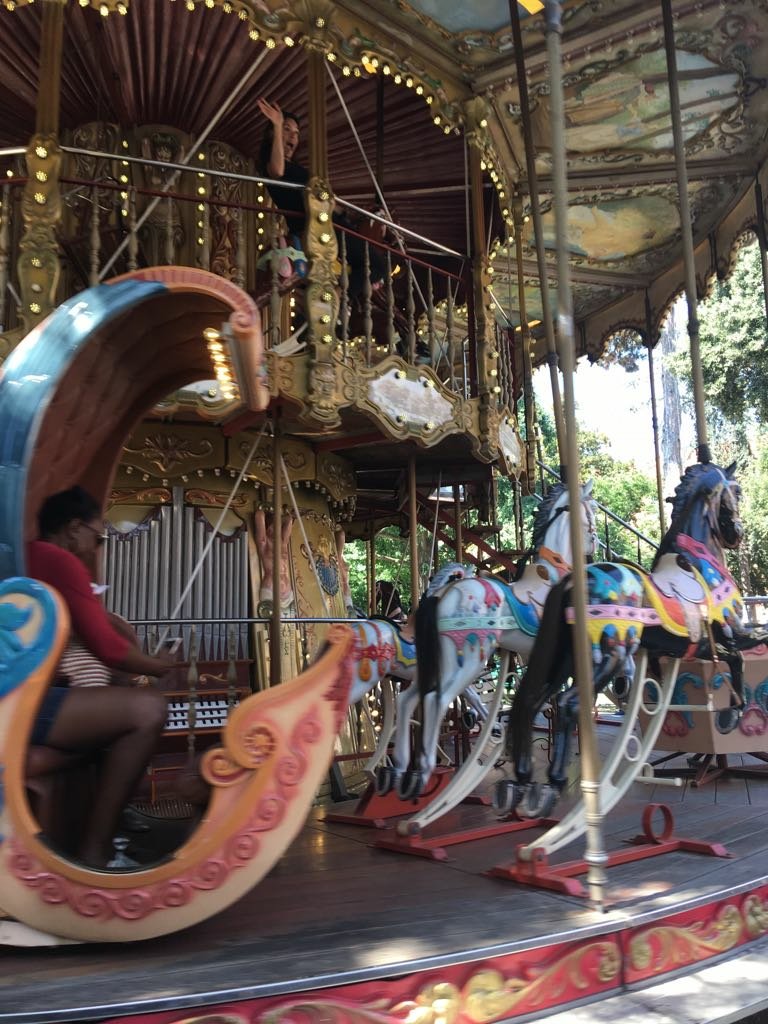 Me waving from my cheval (horse) upstairs. Who knew merry-go-rounds could have a second floor?!

Thank you Toulouse, moving on!